The Year of Yaz 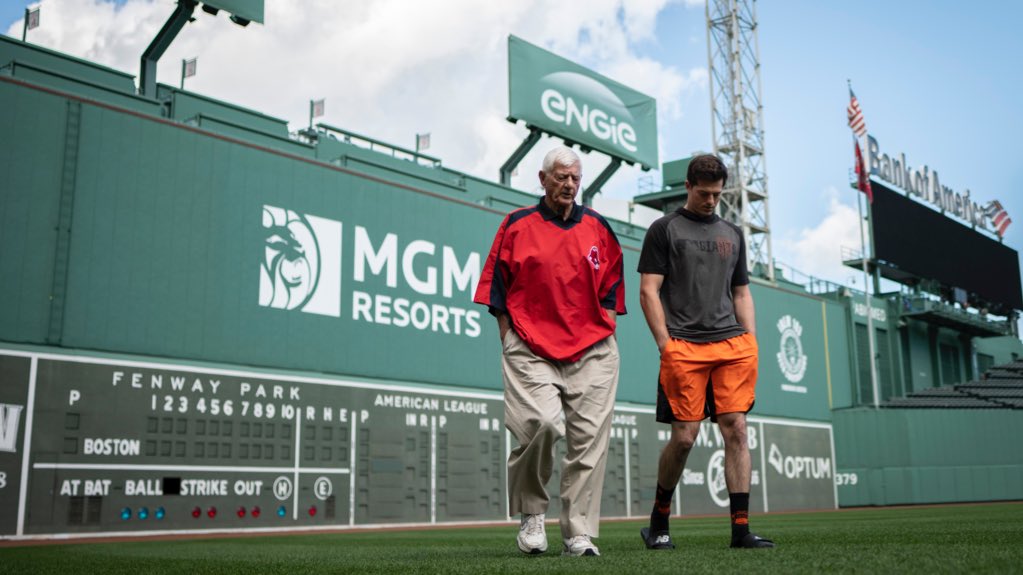 Baseball is funny. This could be considered a terrible week for the Giants, the week in which they were mathematically eliminated from postseason contention for the third year in a row. (But hey–at least that moment came in the third week of September this time!  In 2017, I think it was around the end of May.)

Instead, so many great things happened for the Giants organization this week that I think we’ll look back on it with great fondness:

While Bochy’s achievement was clearly the biggest story due to its historical significance, the feel-good story of the week and this whole year was about Mike Yastrzemski. Much has been written this week about his homecoming in Fenway, where his Hall-of-Fame grandfather Carl played for 23 years and in the town where Mike grew up, so I’m not going to duplicate those stories. Instead, I want to hit the high points of what’s been a year to remember for and by Mike Yastrzemski. So here we go, in chronological order, ten great moments in the Year of Yaz.

#10: Yaz’s major league debut, Saturday, May 25, 2019, at Oracle Park. This was not a great weekend for the Giants. The Friday night game had featured an 18-2 beatdown started by #ForeverGiant Drew Pomeranz and Mac Williamson’s last moments as a Giant (0 for 4 with three strikeouts). After that game, Mac was DFA’d, and it was Yaz time.

Let’s put that debut into context. On May 25, the Giants were mired in what was so far a terrible season (21-30, and that would get worse). By that point, they had already played ten different guys in the outfield (Austin, Belt, Duggar, Gerber, Joe, Parra, Pillar, Reed, Solarte, Williamson). Yaz was next up. Beyond his famous last name, there was no reason to believe he’d fare any better than his outfield predecessors. He was closer to 29 years old than to 28 and a career minor leaguer who never got a call-up despite playing in one of the most inept organizations in baseball, the Baltimore Orioles.

So after all of that, Yaz and his family likely didn’t care much that he went 0 for 3 with two strikeouts in another lopsided Giants loss in his debut game. They were too busy savoring a moment they thought might never come, and in some nice foreshadowing, the Giants fans at Oracle recognized the moment, too.

#9: Yaz’s first major league home run, Friday, May 31, 2019, at Camden Yards. This moment again took place during a horrible Giants loss, but it was a good game for young Yaz. He was playing for the first time in Oriole Park at Camden Yards in Baltimore, the park where he’d dreamed, during all those years of toiling in the minors, of taking his first at-bat. Instead, he hit his first major league homer there as a visiting player.

First big league homer for Mike Yastrzemski, who played more than 700 games in the minors to get to this point: pic.twitter.com/FFt1El79ig

#8: Yaz earns the save, Saturday, June 15, 2019, at Oracle Park. Will Smith had converted 17 straight save opportunities to start the 2019 season, but he needed some help to finish this one. After giving up a solo homer to make the score 8-7, Smith had the tying run on base with two outs. Yaz ended it with this great catch.

#7: Yaz puts the game out of reach, Saturday, June 23, 2019, at Chase Field. The Giants quietly started turning their season around in June, going 14-13 for their first winning month since the previous June. The most memorable stretch of June was “Alex Dickerson Weekend,” when the “Dick! Dick! Dick!” chant made its debut as Dickerson obliterated the Diamondbacks in two straight games. It was also a good week for Yaz, who hit three homers in four games, including a two-run ninth-inning shot in this game that turned a one-run lead to a three-run lead.

#6: Yaz does not get sent down, Monday, July 15, 2019, at Coors Field. This was when the Yaz story could have come to an abrupt end. Yaz was hitting .227 going into the first game of a doubleheader at Coors Field. The Giants thought they might need a fresh arm, so they told Yaz to pack his bags to go back to AAA. As Yaz noted this week, the way the Giants were churning outfielders this season, he understood that he might never get another shot.

Instead, June-July hero Alex Dickerson came up with a sore back, and the Giants felt they needed an extra outfielder, so Yaz did not go to AAA, after all. He ended up with nine hits and two homers in the Giants’ four-game sweep of that series, and no one ever mentioned sending him down again. [Funny story: The Rockies actually were ahead of the Giants in the standings when that series began. They’ve never been heard from since.]

#5: Yaz makes our day, Sunday, July 21, 2019, at Oracle Park. This was already a great day because we got to hang out with Surf Maui and Vail Sunshine and meet Totalfan62 (and Mrs. TF62) and Paul in P.V. for the first time. And it ended happily when Yaz hit an opposite-field homer to walk the Giants off in extra innings. [Funny story: The Giants were actually ahead of the Mets in the standings after winning three out of four in that series.]

#4: Yaz goes deep three times, August 16, 2019, at Chase Field. This was an epic game in which the Giants and Diamondbacks combined for 12 homers, a slugfest finally won by the Giants thanks to Yaz’s 11th inning homer, his third of the game.

This output surprised even Mike himself.

#4: Yaz hangs a “L” on Kershaw, September 6, 2019, at Dodger Stadium. This is a fun one because Yaz didn’t actually face Kershaw–he didn’t get the start versus the tough lefty. The Giants’ righties had succeeded in elevating Kershaw’s pitch count, so manager Dave Roberts pulled him with the score tied 1-1 and two runners on and two outs.  Kershaw didn’t appreciate this very much. His mood didn’t improve when Roberts, in the first of two oddball moves that inning, ordered Buster Posey walked to load the bases. This was beyond bizarre because Kershaw had made Buster look silly on his first two ABs. Then Bochy counter-struck and put in Yaz to pinch-hit with the bases loaded.

#3: Yaz wins one with his hustle, September 15, 2019, at Oracle Park. The Giants were limping to the end of a desultory home stand, in danger of losing both the home series and the season series to the lowly Marlins. Yaz was on third in the bottom of the eighth with the game tied 1-1. He raced home on a wild pitch with the winning run as the Marlins’ pitcher, covering home, landed on top of him.

By this point, we all just wanted him to get to Fenway Park for the emotional reunion with his grandfather in one piece. He’d been hit hard on the foot with a pitch the night before, and having a 240-pound man land on top of him couldn’t have felt good, either. But that didn’t stop him from doing what it took to help the Giants win the game and the series.

#2: Yaz hits homer #20, Tuesday, September 17, at Fenway Park. The amount of hype and distraction that accompanied the first appearance of Carl Yastrzemski’s grandson in the park where the Hall of Famer played for 23 years was incredible. Pregame photo shoots and media demands. The emotions. Even the warm welcome by the usually not-so-warm Red Sox fans when they heard the name “Yastrzemski” announced for the first time since 1983.

Yaz struck out in his first at-bat. He walked in his second one. But then in the fourth inning, this happened.

As amazing as this all was, given the history and the distractions, that homer marked another important milestone. Yaz is the first Giants rookie since Dave Kingman in 1972 to hit 20 homers. Not 2010 Rookie of the Year Buster Posey, not Will the Thrill Clark. Mike Yastrzemski.  This is a guy who didn’t hit his first one until May 31, a guy who before 2019, had never hit more than 15 in a season as a pro.

#1: Yaz-to-Yaz first pitch, September 18, 2019, at Fenway Park. This moment speaks for itself. The smiles on both grandfather and grandson make me want to watch it over and over.

So there it is–the Year of Yaz. Will there be more great moments? Will one of them involve accepting the Willie Mac Award next Friday night at Oracle Park?

[In an otherwise desultory evening for the Giants, Yaz had three hits last night.]

However it turns out, Yaz’s story has been poignant, inspirational, and fun this year. May it continue!  Lefty out.