“Timing and Fit”: The Sad Story of the Giants’ Offseason 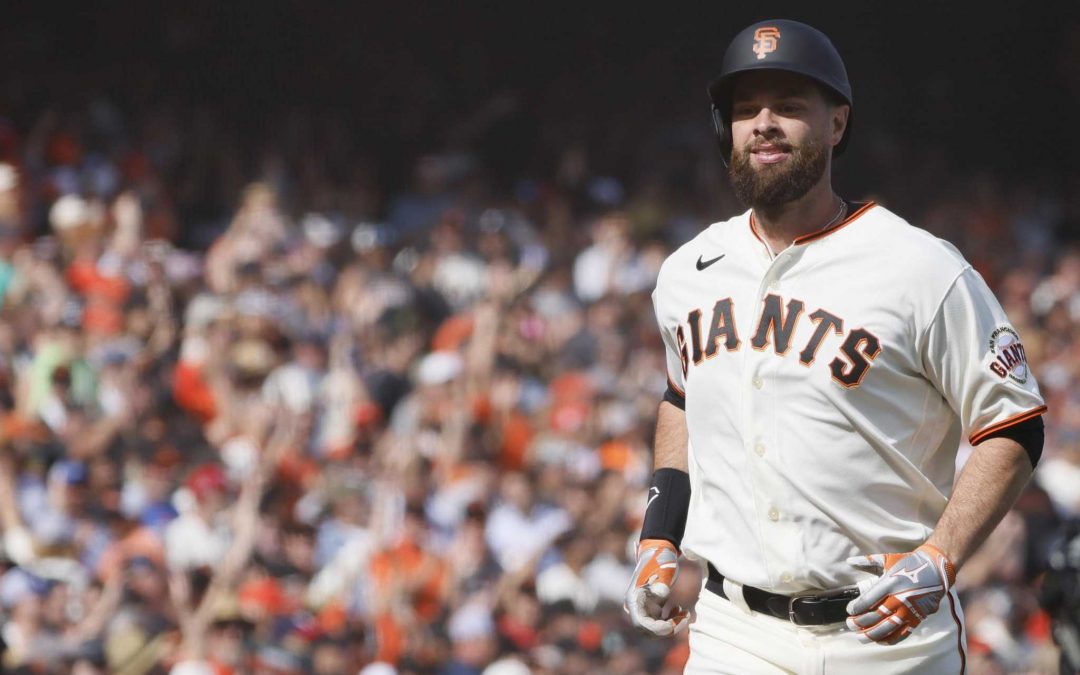 Giants’ President of Baseball Operations Farhan Zaidi met with beat writers on Thursday, and he reluctantly answered questions about Carlos Correa and Brandon Belt signing contracts elsewhere. The Correa debacle has already been discussed ad nauseum, and I for one don’t care if I ever hear that name again (but we will, of course). Greek Giant has also covered Belt’s departure for Toronto in two separate posts this week, so I won’t belabor that, either, other than to just note that I’m really sad that one of my favorite Giants for the past decade will play in another uniform next year.

I do, however, want to riff on something Zaidi said in his press conference with regard to Belt. It’s summarized in a couple of tweets by Kyle, better known as Cove Chatter, who is a Friend of TWG. Kyle is both nice and calm, and he doesn’t criticize just to criticize like some of the rest of us do(!). But here are his thoughts.

It's not like Belt had a great year. Not even a good year, really. But this is a pretty weak excuse for not bringing back a decade-tenured player who had a .975 OPS in 2021. I hope he's an All-Star with Toronto. https://t.co/GXpaSs8rLh

“Timing and fit.” Zaidi actually met with reporters and said with a straight face that Brandon Belt wasn’t a “fit” for the 2023 roster, even though what remains in-house is a platoon with the “heavy” side being manned by LaMonte Wade Jr., and the other half presumably covered by Wilmer Flores and/or J.D. Davis. Zaidi also reiterated that they want Joc Pederson to be the full-time DH (by which he means “full-time except when a lefty is pitching”), meaning that there was no “fit” for (almost) 35-year-old Belt and his chronic knee problems.

Let’s just break all this down a little bit. Wade Jr. is 29 and has 745 career plate appearances, or roughly one and a half seasons between the Twins and the Giants over four major league seasons. His career WAR is 1.1, and his career OPS+ is 103 (right around league average). His 2022 season, which began with a knee injury (sound familiar?), was a disappointing regression–he had an OPS of .665, an OPS+ of .88, and only 251 plate appearances. His 2022 was much more in line with his two partial seasons with the Twins (94 and 76 OPS+) than with his breakout campaign with the Giants in 2021 (117 OPS+ in 381 PAs), which won him the Willie Mac Award. Wade Jr. has only started 46 of his 162 major league starts at 1B–a bit over 25%–and both the eye test and the metrics say he is an inferior defender (at all positions he plays, including first base).

So. Let’s review. Wade Jr. is not a rising young prospect who would have been blocked by Belt–he’s 29 and basically a journeyman. He’s had one above-average major league season as a hitter. His defense is a clear downgrade from a healthy Belt at 1B. Really the only good thing Wade Jr. has going for him, other than his delightful 2021 story, is that he’s still relatively cheap.

OK, now let’s talk about the other “fit” issue, which is Joc Pederson at DH. This also gets into the “timing” part of Zaidi’s quote. If the Giants were hell-bent on keeping Joc, and for reasons that I’m not entirely clear about, they seemed to have been, the only way to accomplish it was to throw a qualifying offer with its nearly $20 mil one-year payday, at him. They guessed correctly that even though Joc clearly preferred to leave the Giants and sign with a better team, he would not walk away from a guaranteed payout like that. But they had to make that decision almost immediately in the offseason, well before they knew if Belt would be healthy enough to return to the field next season.

Having thrown that much money at Pederson, they have to give him the lion’s share of the lefty DH at-bats because Joc gives back all of his value on offense if he plays in the outfield. When asked if he’d consider working on his defense or getting into better shape, he shrugged and said, “It is what it is.” And really, why should he? The Giants massively overpaid him to not be an outfielder. Pederson’s deal also explains why they finally decided to eat the final year of Tommy La Stella’s contract, since La Stella also shouldn’t play anywhere but DH. So the Giants have already spent about $30 mil on their lefty DH spot ($11.5 mil for La Stella’s contract and nearly $20 mil on Pederson’s qualifying offer). Belt, especially if he’s healthy enough to have his legs under him while he’s hitting, would be an excellent lefty DH. Indeed, that will be his primary assignment with Toronto, but he can also play some 1B when Guerrero Jr. needs a day off. But because of the “timing” of when Joc got his qualifying offer and the “fit” (no lefty DH opening due to the decisions already made on Pederson and La Stella), they didn’t have “room” for Belt.

So having made the decision about Pederson very early on constrained various other decisions in the Giants’ offseason, most notably not bringing Belt back. I still think a healthy Belt even at 35 is a (much) better option at 1B than Wade Jr., and he might even turn out to be a better lefty DH than Pederson will be next year. We’ll be able to make an apples-to-apples comparison between them, of sorts. But really, the decision was made about Belt at the moment Pederson accepted his qualifying offer (La Stella, too). And it’s sad that they picked a guy who didn’t want to remain a Giant over one who absolutely did.

I heard Susan Slusser, the Giants beat writer for the Chronicle, on KNBR on Tuesday. Starting at around 11:30 on the recording, she says several things:

Slusser, as you might recall, is new this year to the Giants beat after long-time beat writer Henry Schulman’s retirement, so she has different sources and an outsider’s perspective compared to others who have been on the Giants beat. Long-time beat writers Andrew Baggarly and Alex Pavlovic offer similarly lukewarm assessments of how the Giants have done this offseason. Baggarly called it a “Plan C offseason,” pointing out (and I’m paraphrasing) that the Giants have increased their payroll substantially to build another mediocre team–and worse, one that will likely have to be rebuilt again 11 months from now.

Zaidi’s comment about “timing” and Slusser’s observation that free agents found the Giants “slower” than other teams make sense. The Giants wasted weeks of precious time in a futile chase of Aaron Judge while many other teams pursued and signed other more attainable A-listers (Jacob DeGrom to the Rangers, Justin Verlander to the Mets, Trea Turner to the Phillies, and Xander Bogaerts to the Padres, to name just a few). Then they spent more time on the doomed pursuit of Carlos Correa, and while we can have more sympathy with how all that played out, the last few attractive free agents still on the market signed with other teams (e.g., Dansby Swanson to the Cubs) during the week between when the Giants made their deal with Correa and when that deal dramatically fell apart.

Some of that is bad decision-making, and some of it is bad luck, but the end result is the same: Haphazard roster construction and arguably little or no improvement over the 2022 roster, when you consider what they lost. As Slusser noted in the interview I linked, the Giants’ first base and third base situations are very iffy at the moment, their catching situation is precarious, and while they may have improved the outfield offensively (if Mitch Haniger and Michael Conforto can actually stay in the lineup), they really didn’t improve it defensively. Oh, and putting aside that they pissed off Brandon Crawford in the Correa saga, he turns 36 this week, and we’d better hope he stays healthy.

Zaidi, of course, tried to paint a more optimistic picture of the 2023 team.

Farhan Zaidi on the offseason: "I understand there's going to be some skepticism because we had a couple of pursuits fall short, but we also did a lot of work and we think got better. We're excited to start seeing the fruits of that once games begin."

Zaidi may be the only person in the world who actually thinks the Giants “got better” this offseason (and you wonder if even he really believes it). No local writers and no national writers agree with him.

Even more concerning, despite Slusser’s charitable comment on Tuesday that she doesn’t think the Giants are done making moves, Zaidi’s press conference on Thursday seemed to imply that they are done: They don’t expect to pursue a backup catcher on a major league deal (since then, it was announced that Austin Wynns cleared waivers and accepted an outright assignment to AAA Sacramento, so he’s still in the mix), and even though they’d like some more middle infield depth (right now it’s Crawford and Thairo Estrada and that’s it), Zaidi can’t imagine whom they’d take off the roster to make room for such a player. Um. Is Crawford going to play 162 games? Or, let’s say that Crawford gets some days off because he’s 36 and Estrada slides over to SS on those days, and maybe Flores plays 2B on those days…is Estrada going to play 162 games?

So yeah,  they did stuff, and yeah, they spent money, but–the roster still feels full of holes, even though Zaidi seems to think it’s “done.”

It was actually quite an eventful week, most notably because of Correa and Belt, but there were other items worthy of mention. Yesterday was the deadline for teams to either agree upon contracts with their arbitration-eligible players or exchange arbitration figures, and the Giants avoided arbitration by agreeing upon deals with all eight of their remaining arb-eligible players.

The Giants agreed to terms with all eight arb-eligible players. Also, Austin Wynns accepted an outright assignment to Triple-A, so he’ll compete for the backup catcher job. Here are the arb salaries: pic.twitter.com/YGVSrRdPx5

No extension for Logan Webb, but that could still happen even though they had to meet yesterday’s prescribed deadline for arbitration figures.

The other big news was that longtime clubhouse manager Miguel (Mike) Murphy turned 81 this week and finally decided to retire after 65 years(!!!) with the Giants organization, dating back to their arrival in San Francisco in 1958.

Mike Murphy is retiring after 65 years in the Giants clubhouse. “Murph” has been a fixture with the organization since it moved to San Francisco.

This is a little sad, and after exits from the organization by Bruce Bochy and Brian Sabean, along with longtime players (Belt and Evan Longoria), it’s tempting to ask questions about why so many franchise icons are leaving now. In Murphy’s case, though, I think we should just say “81 years old” and wish him much happiness in his well-earned retirement. End of an era, for sure.

The whole situation is just so disappointing and empty-feeling. On the bright side, in one month and two days, pitchers and catchers will report to Scottsdale, and that’s always something to get excited about. The Giants are also holding Fan Fest on Saturday, February 4 (10 a.m.-3 p.m. at Oracle Park). It will be the 30th anniversary of the first Fan Fest, and it’s the first in-person one since February 2020. That seems like a long, long time ago. You wonder how well attended the Fan Fest will be this year. Fans will probably be more excited about saying hi to Kruk and Kuip than any of the players, with the possible exceptions of Crawford and Webb. But at least baseball will be back soon.