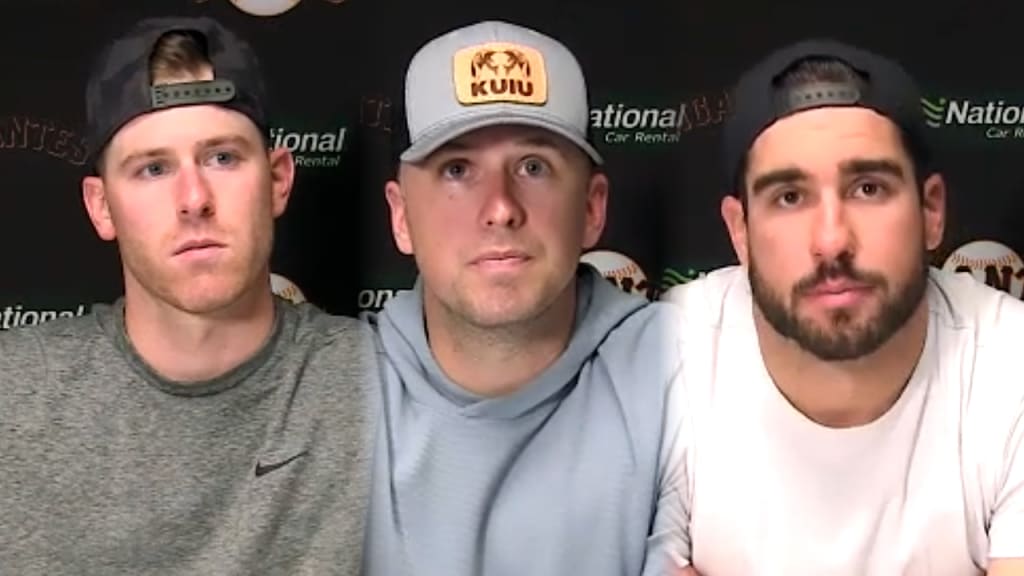 MrLefty has created a new version of WAR, and in this version, Mike Tauchman has a WAR of 3.0 for the season, meaning that had not Tauchman been in the right place at the right time, the Giants might have lost three games that they eventually won. Replace Tauchman with someone else (say Alex Dickerson, the Opening Day left fielder), and the Giants likely lose those games. See? Wins Above Replacement, Tauchman style. tWAR, if you will.

MrLefty does not want to hear your nonsense about analytics and bWAR or fWAR. He likes tWAR. That’s his story, and he’s sticking to it.

Another Tauchman-inspired stat that is making the rounds on Giants Twitter is “Tauch blocks,” and Tauchman now has two. On two of the last three Friday nights, Tauchman robbed two great hitters (Albert Pujols and Juan Soto) of sure home runs that would have won or tied the game, respectively.

It’s a 2fer Tauchman if you can handle it.#ResilientSF #SFGiants pic.twitter.com/9cVuReCTP4

Albert and Juan, your thoughts?

The other tWAR happened earlier this week in Texas, when Tauchman stunned everyone by hitting an unlikely grand slam that took the Giants from two runs down to two runs ahead late in the game. Dave Flemming had a great radio call of the grand slam.

ESPN writer Tim Keown did an excellent feature article on the Giants this week (worth a read and not behind a paywall), and among other things, he mentioned that Farhan Zaidi had been trying to acquire Tauchman since 2018, when he was still general manager of the Dodgers.  Tauchman is hitting .183 with a .585 OPS this season, but with that history, a tWAR of 3.0, and no minor league options, he doesn’t appear to be going anywhere. With Mike Yastrzemski and Darin Ruf about ready to return from the injured list, the Giants suddenly find themselves awash with outfielders, especially left-handed-hitting ones. This may mean that LaMonte Wade, Jr. or Steven Duggar, who do have options, may be about to receive a demotion they don’t particularly deserve.

Tony “Don’t call me Disco” DeSclafani pitched his second complete-game shutout of the season, tying him for the major league lead with the A’s Sean Manaea. As with his previous complete game, he flirted with throwing a “Maddux”–a complete game shutout with under 100 pitches–but just missed at 103. He gave up just two hits, walked one, and struck out 8.

That merited a Buster Hug.

With a doubleheader today, a day game tomorrow, a cross-country flight, and no off days until June 21, the complete game was huge. “It was just what the doctor ordered,” Kapler said.

Besides calling a complete-game shutout, Posey provided the only offense the Giants would get (and need, as it turned out) with this home run. That’s the Giants’ bullpen catcher who sticks his glove out and casually snags the homer.

From the starting catcher to the bullpen catcher… Buster's solo shot gets the Giants on the board pic.twitter.com/grXurJ4UuR

Clouds in the Sunshine

This has been a good but not great week for the Giants. Since I published last week’s column, the Giants have gone 3-2 (there was an off day and a rainout that will be made up today). Now, a .600 win percentage is a good week no matter how you slice it, but…both of the losses were winnable, and the second one, in Texas, featured two late blown leads. The bullpen’s woes have been a storyline the whole season, and they’re still troubling. As Grant Brisbee pointed out in his latest of several pieces on the Giants bullpen, Tyler Rogers is uniquely ill-suited for the Frankenstein’s monster that is extra-inning games in the COVID era. When the home team starts with a runner on second base and nobody out, you need a strikeout pitcher, not a “crappy contact” pitcher–because even that crappy contact could lead to the run scoring. But Rogers is not that guy. And Jake McGee, who sometimes can be that guy (31 strikeouts in 26.1 innings), is also the guy who leaves too many fastballs in hittable spots. (McGee has given up more homers than any other reliever on the staff and more even than a couple of the starters.) The Giants really do need a late-inning guy who can reliably miss bats.

The other “cloud” from last night’s game was the silent Giants bats. They had only four hits and zero walks, which wouldn’t be surprising in a game started by Max Scherzer–except that Scherzer came out of the game after 12 pitches with a groin injury. Sucks getting old, doesn’t it, Max? Anyway, the Giants’ inability to muster much of anything in what turned into a bullpen game for the Nationals was a bit concerning, even as we enjoyed DeSclafani’s dominance and some great defense. The TV announcers and Andrew Baggarly cited the intense pregame preparation the hitters had done for Scherzer, and–well, OK, but things happen. Pitchers only rarely throw complete games these days, so at some point in a game, you’re likely going to have to adjust to a new pitcher or two or three.

There were so, so many this week. Some were unfortunately due to injuries to Evan Longoria and Alex Dickerson. Others were due to poor performance (nice knowing ya, Matt Wisler and Nick Tropeano) or simply operational needs. (Wait, MyGuy™ Thairo Estrada is gone already? He had one at-bat!) The Giants also called up Sammy Long, who made his dazzling major league debut on Wednesday, and Jimmie Sherfy. Caleb Baragar was activated from the injured list, and Scott Kazmir was DFA’d, cleared waivers, and returned to AAA. The Giants just activated Yaz in time for today’s doubleheader, too.

At the moment, the Giants are carrying 14 pitchers on their 26-man roster. These include five guys (Leone, Littell, Long, Menez, and Sherfy) who not so long ago were pitching for the Sacramento River Cats. They also cycled through Camilo Doval, Gregory Santos, Kazmir, and Tropeano. This does not include two pitchers on rehab assignments, Tyler Beede and John Brebbia, who will have to be activated at some point in the not-too-distant future. It’s good that the Giants are trying out their various internal options before the trade deadline comes up next month, but it gets a little hard to keep track sometimes. I’ve checked the active roster several times while writing today just to make sure I hadn’t missed anything!

The Giants should be set up reasonably well for this doubleheader–better than the Nats, thanks to DeSclafani’s masterpiece and Scherzer’s injury, which forced the Nats to use their bullpen heavily. Gausman, if he’s on his game, could easily give the Giants their second straight complete game. And the return of Baragar gives the Giants some depth to eat innings in the second game. But–well, you know. You still have to play the games, and these seven-inning doubleheaders haven’t been any kinder to the Giants than the extra-innings rule has been. It would be nice to see the bats bust out a bit.

The Giants have also faced a steady diet of right-handed starters, which is why Austin Slater and Mauricio Dubon have barely been seen this past week. Both Nationals starters in the doubleheader today are also right-handed, so we’ll see what Kapler does. They will see a lefty, the venerable Jon Lester, tomorrow.

It’s good that the Giants are getting some guys back. They have three more against the last-place Nationals and then fly home for four against Arizona, who at the moment are sitting on the worst record in baseball. This should be a good week for the Giants…but ya gotta play the games. Hopefully we’ll amass some more tWAR. Lefty out.