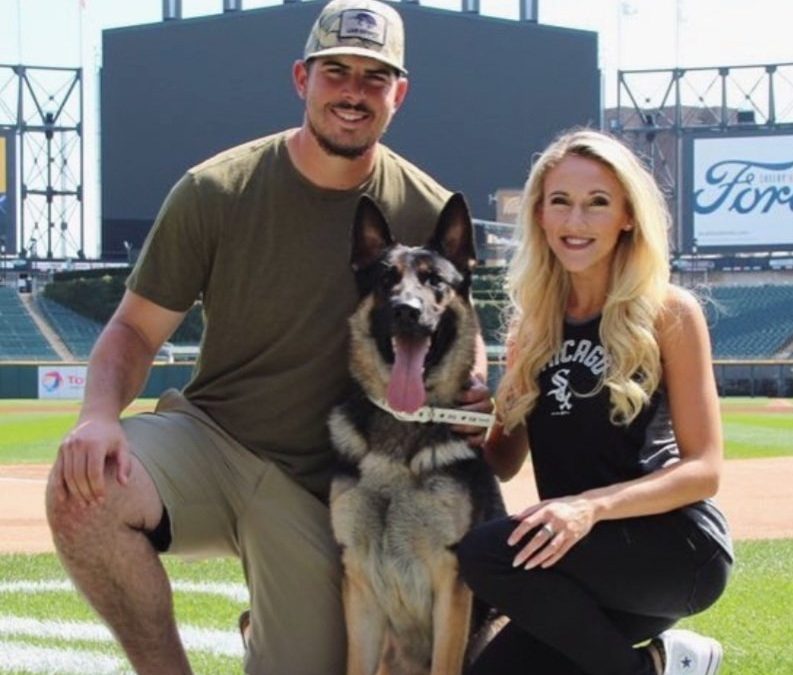 I have been a serious dog person my whole life, and longtime regulars on TWG know that MrLefty and I had a beloved yellow Lab, Winnie the Pooch, who left us in 2018. But I don’t think I’ve ever mentioned that my very FIRST dog was a German Shepherd. For Christmas the year I turned six, my parents gifted me with a tiny German Shepherd puppy named Dos Huevos and called “Dos.” We kids were told that the name came from a novel that my English major dad had started writing while in college and never finished, but sometime in adulthood, I finally realized that perhaps the name had a more off-color meaning. Dos was a gorgeous dog but not a particularly nice one, and despite him being “my dog,” my dad was the only person he ever really respected. He tolerated the rest of the family and snarled angrily at anyone else who came into (or even near) the house.

A few years later, my parents bred Dos to a German Shepherd bitch named Mia down the block in exchange for the pick of the litter when the puppies arrived. My sister and I had fun trying to spy on Dos and Mia trying to beget those puppies, and I remember my mom shooing us away from the window (they were shut up in our playroom) and telling us to “give them privacy.” Anyway, in due course, there were puppies, and we got a second German Shepherd, an even more gorgeous boy named Attila the Son. You can see that my parents had whimsical ideas about what to name dogs. Attila was beautiful and a lot sweeter and nicer to his humans than his father was.

With this dog-centered narrative as a big part of my childhood, you can imagine my delight when I learned that the newest Giant, left-handed pitcher Carlos Rodón, has a beautiful German Shepherd named “Lefty.” I mean–what a great name for a dog!  I asked MrLefty, “How do they know the dog is left-handed?” But I kid. The dog is named after his lefty dad, Carlos. It reminds me of Tim Lincecum naming his French bulldog “Cy” (for obvious reasons). We’ll get back to Tim Lincecum in a minute because he factors somewhat in this story.

#SFGIANTS DOGWATCH:
Looks like @Carlos_Rodon55, the newest member of the Giants, has a gorgeous German Shepherd named "Lefty." All evidence points to him being a very good boy. pic.twitter.com/U1zOXJN6ij

OK, so maybe Lefty the German Shepherd is my new Favorite Giant, but we should give a proper TWG welcome to his dad. The Giants made the first splash of the suddenly reopened free agent market by coming to terms with Rodón on a two-year, $44 mil deal with a player opt-out after the first year. The deal hasn’t been announced yet because it is pending a physical, but Andrew Baggarly noted in his story about the signing that the Giants clearly would have been satisfied with his medicals before coming to an agreement. The Giants’ 40-man roster currently stands at 39 without Rodón.

Rodón, a Miami native, is headed into his age-29 season. He went to high school and college in North Carolina and was the #3 pick (White Sox) in the 2014 draft out of North Carolina State. You should notice two themes here. First, as MrLefty put it, “Can the Giants build an entire team out of just guys from North Carolina State and Vandy?” As a reminder, the Giants’ first and third picks in the 2020 draft were from NC State (Patrick Bailey and Nick Swiney), and then they traded for another one (Will Wilson). If I recall correctly, one of their heads of scouting lives an easy drive from NC State, but I digress. The answer to MrL’s question is “No” because Marco Luciano, Luis Matos, Kyle Harrison, and Jairo Pomares never went to college, and Will Bednar went to Mississippi State.

Second, you might also recall that Kevin Gausman had been a high first-round pick who’d had a bunch of mediocre seasons with the team that drafted him (the Orioles) before showing enough potential that the Giants nabbed him on a short-term deal before the 2020 season, and that worked out pretty darn well for Gausman and the Giants. So there’s a pattern here. But Rodón had a career year in 2021 that far exceeded anything Gausman ever accomplished before coming to the Giants–he was an All-Star, fifth in AL Cy Young voting, and had a 13-5 record with a 2.37 ERA and a WHIP under 1. He also logged 185 strikeouts in 132.2 innings against just 36(!!!) walks and had an ERA+ of 183. Oh, and Rodón pitched a no-hitter last April.

So…why didn’t a stud like that in his prime get a long-term deal (like Gausman, Marcus Stroman, Jon Gray, etc. did before the lockout)? Well, in that list of stats, you might have noticed “132.2 innings,” and he made just 24 starts. He’s had a long history of arm and shoulder issues and had Tommy John surgery in 2019, and he had a second-half drop-off in 2021 that was attributed to shoulder fatigue. He’s been over 150 innings just once in his career (2016, age 23). Despite his great season, the White Sox didn’t even want to take the risk of giving him a qualifying offer, which works out well for the Giants.

Two other salient facts about Rodón. First, he’s always worn #55 (it’s in his Twitter handle), and no one has worn that number on the Giants since fellow dog dad Tim Lincecum departed after the 2015 season (told you I’d get to Timmy).  It will be interesting to see if that changes for Lefty’s dad. Second, he had his breakout season in 2021 after Ethan Katz left the Giants to become the White Sox pitching coach. So it seems safe to predict that Rodón will fit right in with the “pitching lab” approach that’s worked so well for the Giants in the Zaidi/Kapler era and that Katz might have provided a strong reference (on both sides of the equation).

I love, love, love this signing. The Giants needed (or at least wanted) another ace-adjacent guy (like Gausman was) to pair with Logan Webb. They’d passed on other guys, including Gausman himself. They took a pricey but short-term flyer on a guy with huge upside–maybe even more so than Gausman. As Grant Brisbee observed in his analysis of the Rodón signing, the Giants basically chose a short-term deal with Rodón over a long-term one with Gausman. And as a commenter pointed out in response to that article, Farhan Zaidi has now signed 4/5 of a rotation for a total of $125 million (if Rodón stays for 2023): They got four guys for 10 years for the price of one Gausman.

Some commenters here and elsewhere criticized the Giants for agreeing to the opt-out after one year. You might remember that they got burned by this with Johnny Cueto, who was supposed to opt out after his second year but instead got hurt and stayed for six expensive years. (Good Giant, especially in 2016, but overall a frustrating trajectory.) But this is different. One of two things will happen: Rodón will have a great year, opt out, and go back on the market (and the Giants could potentially get a draft pick out of that, since the new CBA hasn’t gotten rid of the qualifying offer yet, and Rodón didn’t get one from the White Sox). Or he’ll have a bad/meh/injured year and the Giants are stuck with him for one more year. But that’s one year, not four as with Cueto, and the Giants have the cap space now and in 2023 to accommodate that calculated risk. Meanwhile, if Rodón does opt out and leave after 2022, they still have the other four guys locked in through at least 2023. So they’ll have plenty of time to bring along their pitching prospects, the best of whom are in the lower minors, and/or to sign another Pomeranz/Gausman/Smyly/Rodón kind of guy. Did I mention that I LOVE this signing? Taken together with the re-signings of Anthony DeSclafani and Alex Wood and the addition of Alex Cobb before the lockout, Zaidi has done a freaking brilliant job of building a rotation that after the 2021 season consisted of: Logan Webb.

Well, we’re still waiting for a bat(s). Great job with the rotation, Farhan, but where’s the beef? And yes, I know we all want Seiya Suzuki and/or Kyle Schwarber, but so do lots of other teams. So we’ll have to see where this goes. The good news is that the combination of smart shopping for the rotation and the increase in the CBT means the Giants have plenty of room to keep spending if they want to do so.

The other implication of the Rodón signing is that guys like Sean Hjelle, Sammy Long, and Kervin Castro (who apparently is being stretched out as a starter) can be AAA depth, which is probably where they belong. That puts Tyler Beede, who is out of minor league options, on the bubble. (Ironically, Beede is also a 2014 first-round draftee like Rodón.) Is this the end of the line for Beede as a Giant? Will he be traded, or given an opportunity to stick in the bullpen (maybe taking the spot Castro could have had)? DFA’d? This is a critical period of time for Beede, and with the shortened spring training, he doesn’t have much of it.

I’ve been on a bit of an emotional roller coaster this week. When negotiations stalled on Wednesday and they announced that the start of the season would be pushed back, I disgustedly–and as it turned out, prematurely–cancelled our hotel reservation in San Francisco for the home opener weekend. Then there was the sudden, giddy realization on Thursday that baseball was coming back (hotel in SF rebooked!). It looked so hopeless for so long and then turned around so quickly that I still don’t quite have my mind around it. Yesterday, my emotions wavered between delight that pitchers and catchers were reporting and sulking because it was the day we’d been booked to fly to Arizona for our spring training weekend. (And no, we couldn’t just re-do the whole thing for a week or two later. I’ll admit we discussed it for about three minutes, but then we checked our actual calendars and realized it wasn’t happening. It’s wait till next year–again–to visit all our favorite Scottsdale haunts.) If only those bozos had started negotiating in December, they could have saved our trip. Ah, well.

Moving on. I’m beyond thrilled that baseball is back. The world is in turmoil and my own life has been pretty stressful on several fronts over the past several months. I not only WANTED baseball back, I NEEDED it back. I’m looking forward to going to the River Cats’ opener on April 5 and the Giants’ opener on April 8. I am not boycotting. That would only hurt me. Plus I just went through a contentious collective bargaining experience in my workplace (as an observer, not a participant), so I know these things can get dicey and sides can get entrenched. Being mad about it doesn’t help anything. It is what it is.

I do have some final thoughts about German Shepherds. They are beautiful, smart, and courageous dogs. They also don’t make great family pets, unlike Labradors or standard poodles, which is what my family got after the German Shepherds had left us. Shepherds are working dogs, and if you just park them in the backyard with no purpose, they can get bored, vengeful, and destructive. (I relate to that, sort of.) They also shed hella hair, which is why my mom, who got sick of vacuuming up after them, insisted on a non-shedding breed for our next dogs. Be that as it may, welcome, Lefty the Dog–and Lefty’s dad.  Lefty out.