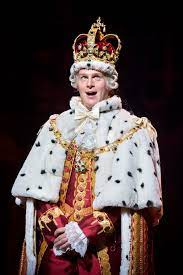 “What Comes Next?” is a song in the musical “Hamilton,” and it’s sung by King George III, who serves as the show’s comic relief. George Washington, Alexander Hamilton, and their compatriots have succeeded in defeating the powerful British and winning the Revolutionary War. Now, King George wonders from afar, “What comes next?” You won your war of independence–but do you know how to run a country?

It’s a good question, and one we could still ask today, but it’s time to segue back to our Giants. The Giants of the 2020s are now firmly under the leadership of Farhan Zaidi, Scott Harris, and Gabe Kapler. The team not only avoided a fifth-straight losing season but also set a new franchise record for wins with 107, and in so doing, they dislodged the powerful Brit–I mean, the Dodgers–from the NL West crown that they’d worn for eight revolting seasons (see what I did there?).

And now–what comes next? The face of the Giants franchise for the past decade-plus, Buster Posey, shocked the baseball world this week by announcing his retirement at age 34. The hitting coach who helped turn the team’s offensive fortunes around in 2020-21, Donnie Ecker, jumped ship to Texas for a promotion. A major rotation piece for the past six years, Johnny Cueto, has been given a gold watch instead of a $22 mil contract. (OK, technically Cueto’s getting a $5 mil buyout of his team option year, and that would buy him a really nice watch if he wants one. But he’ll probably buy a pony or something.) The times, they are a-changin’. What comes next?

Well…I don’t know, neither do you, and to a lesser extent, neither does Zaidi. The biggest wild card, of course, is Dec. 2, which is the day after the current collective bargaining agreement (CBA) expires. At that point, the owners are expected to impose a lockout, and things like trades and free agent signings won’t happen until the contract negotiations are resolved. But there are almost four weeks between now and Dec. 2, and it’s hard to predict what, if anything, might happen, Hot Stove-wise. But here are a few things that will happen in November. This article from mlb.com provides a helpful reference.

Beyond that–trades, free agent signings, extensions–it’s anyone’s guess. There could either be a frantic flurry of activity (get stuff done before a possible labor shutdown) or none at all. Nonetheless, for the Giants, the biggest “what comes next” question involves the fallout of Posey’s decision to retire:

Now that Cueto’s and Posey’s salaries are off the books, the Giants’ payroll for 2022, which includes arbitration salary estimates and salaries for younger major-league-minimum guys, is a bit under $73 million. If they non-tender Dickerson and Brebbia, knock another $4.5 mil off that total. After all those years of top-heavy salaries, it seems strange to look at the payroll in Cot’s and see only Evan Longoria and Brandon Crawford making over $15 mil, and then the third-highest 2022 salary drops all the way down to $5.25 mil (La Stella). We are definitely in a different era of Giants baseball, and not just because Posey, the last remaining member of the 2010 championship team, is no longer with them.

I don’t have much to add to what Greek Giant and others have said about Posey. I’m still stunned and saddened. I just wasn’t ready for this. We can be glad that we still have Crawford, hope that the Giants bring Cap’n Belt, Gausman, and others back, and we can enjoy our young talent like Logan Webb, Camilo Doval, and (hopefully) Bart. We’ll get excited about the Giants’ future again, but–right now, it’s OK to grieve a bit. We can be happy for him and sad for ourselves. It’s allowed.

What comes next? We’ll find out, one way or another. Lefty out.

(Yeah, yeah. I know Dylan wrote it. I like this version better.)