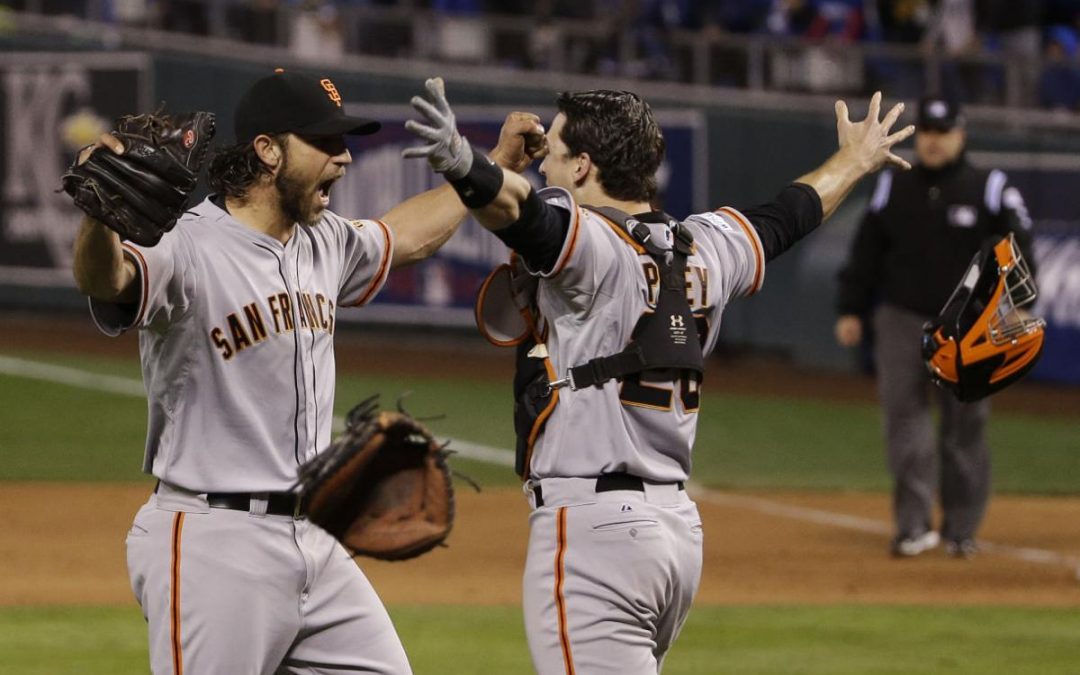 Eight years ago today, Madison Bumgarner and Buster Posey celebrate the Giants’ win in Game 7 of the 2014 World Series.

Well, the World Series is off to quite a start. The Astros had been undefeated in the postseason and had an early 5-0 lead with their ace on the mound. Then the upstart Phillies got to Justin Verlander to tie the game. MrLefty prophesied in the sixth inning, with the score tied, that the next team to hit a homer would win the game. It took until the top of the tenth, but he called it. The bottom of the tenth then had the odd sight of the Astros’ Aledmys Diaz, with the tying and winning runs in scoring position, trying twice to get hit by a pitch and succeeding on the second attempt–but having it appropriately waved off by home plate umpire James Hoye–before grounding to third for the final out of the game. It was thoroughly entertaining. MrLefty and I are rooting for the Astros because of Dusty Baker, but honestly, we have no particular affection or hatred for either team, and we agreed that we could flip to the Phillies pretty easily. It’s fun to cheer for an underdog. We did it three times in the past 12 World Series, but we’ll get back to that.

With the World Series comes memories and anniversaries, and this has been quite the week for them. So I thought today’s column would take us down Memory Lane. This will mostly be happy for us Giants fans and less so for Justin Verlander and Dusty Baker, in the unlikely event that they read Out of Left Field.

Justin Verlander had a great season and was one of the favorites for the AL Cy Young Award. His team was heavily favored in the World Series, and they had him on the mound for Game 1. His hapless opponents had none chance, everyone said.

But I’m not talking about last night. I’m talking about ten years ago, October 24, 2012, when Verlander and his Detroit Tigers were stunned by Pablo Sandoval’s three homers and Barry Zito’s stellar start. Verlander only made it through four innings and gave up five runs. The Tigers never recovered and the Giants swept the series. Last night was the tenth anniversary of that unlikely victory in Detroit, and yes, I do think now’s a good time to repost a photo of the infield dirt from that game that Sister Lefty gave me for Christmas last year. Authenticated field dirt from Game 4 of the 2012 World Series

One of the images I remember best from that 2012 series win was Verlander, leaning quietly on the dugout rail, watching the Giants celebrate on the field. Had the Series gone another game, he would have had a redemption opportunity, but instead, his eyes revealed his misery.

So ten years later, here we are again. Verlander took the mound in Game 1 for his heavily favored team. Again, he gave up five runs, though this time after he’d been staked to an early 5-0 lead. Amazingly, this certain first-ballot Hall of Famer is now in the record books as the worst starting pitcher in World Series history.

I wonder who the best one is? We’ll get there.

Dusty Baker: Haunted by Ghosts of the Past

Dusty Baker is also a near lock for the Hall of Fame once he finally retires. But this week marked the twentieth anniversary of his worst moment as a manager, October 26, 2002, when his Giants blew a 5-0 lead in Game 6 of the World Series and then went on to lose Game 7.  No team since 2002 had blown a five-run lead in the World Series, but twenty years and two days later, his Astros became the next victims.

The last two managers of teams to blow a five-run lead in a World Series game:

2002 seems like a really long time ago now, and this connection reminds me of when Jerry Brown was elected Governor of California again in 2010, and I realized that our daughter would have the same governor while she was in high school that we had when we were in high school. That’s just weird.

As a postscript, Dusty also helped the Giants get to the World Series to face Verlander in 2012 when his Cincinnati Reds lost three straight home games in the NLDS. That is some bad juju between Baker and Verlander and all those tenth/twentieth anniversaries this week. The Astros didn’t know that they never had a chance. It’s also Halloween week, and that’s some spooky stuff.

If I’m being honest, I’m still not over 2002 and probably never really will be, but the championships in 2010, 2012, and 2014 eased a lifetime of pain, and we get to remember them all this week. We got past the 20th anniversary of Dusty handing the game ball to starting pitcher Russ Ortiz as Ortiz left the game in the seventh inning with one out and a 5-0 lead. We all know what happened next: angered Baseball Gods, a dancing Rally Monkey, and a collapsing bullpen. Ironically, people looking for someone (other than Verlander) to blame for last night were screaming that Dusty should have pulled Verlander sooner. So he pulled Ortiz “too soon” and got criticized and didn’t pull Verlander until “too late”…and got criticized, and there you have it.

But let’s move on. This week we have not one but three happy anniversaries to remember: the 2012 championship yesterday, the 2014 championship today, and the 2010 triumph coming up on Tuesday, November 1. You know you want to watch all the video clips again, so here they are, and after you do–don’t you miss Joe Buck? I do!

Obviously it’s awesome to remember those anniversaries each year, but Verlander’s latest crash-and-burn, ten years and a few days after the last one, should also help us appreciate how truly special the Giants’ rotation was during that five-year run. Verlander, Clayton Kershaw, and Max Scherzer are the three greatest pitchers of their generation. We already talked about Verlander’s growing record of World Series futility, and Kershaw’s October stumbles are legendary by now. (Indeed, I may have devoted some space to revisiting a few of them in last week’s column.) Scherzer’s postseason track record is a bit better than Verlander’s or Kershaw’s, but he’s been far from invincible. It’s also worth remembering that Scherzer was also a member of that 2012 Tigers rotation.

In contrast, the Giants had five starters who gave them stellar performances in 2010/12/14 (not all of them in all three, of course). And that’s not even counting amazing bullpen performances by Brian Wilson (2010), Sergio Romo (especially 2012), Javier Lopez and Jeremy Affeldt (all three), and Yusmeiro Petit (2014).

Would Bruce Bochy have done anything differently if he’d been manager of the Giants in 2002 or the Astros in 2022? We’ll never know, but he certainly seemed to know when to take starters out and when to ride his horses.

Anyway, happy anniversary week, Giants fans. Whatever has happened since, and whatever happens next, they can never take those memories away from us.

Oh, and the best World Series pitcher of all time (30+ IP)? That would be the guy at the top of this column. Bumgarner has pitched 36 World Series innings and has an ERA of 0.25. He’s 4-0 with one very memorable save. In five World Series games over three different seasons, he gave up one (1) run–a homer to Salvador Perez in Game 1 of the 2014 World Series.

I am so excited about the Willie Mays documentary that will begin airing on HBO on November 8. Now is a great time to read or reread John Shea’s wonderful 2020 book co-authored with Mays, 24: Life Stories and Lessons from the Say Hey Kid. With the World Series comes the end of the baseball season and the beginning of the “Hot Stove” season. For the past few years, great TWGer HaakAway has run a little contest in which we predict different offseason moves regarding free agency, trades, extensions, the Rule 5 draft, and players being offered arbitration. This year we have a slick Google Forms interface that makes it really easy to submit (and edit) a ballot. Winner gets bragging rights and the iconic MyGuy™ pin.

Here’s the link if you’d like to enter. I’m hoping HaakAway while chime into the comments and tell us the deadline to enter. I’ve already submitted my ballot!

World Series, college football, the NBA season…it’s the most wonderful time of the year for sports fans. Later today, we’ll be flipping between the USC game and the Warriors game, which both begin at 4 p.m., and checking in on Game 2 of the World Series, which starts about an hour later. Along with gorgeous fall weather in Northern California, you couldn’t ask for a better Saturday. Enjoy!  Lefty out.