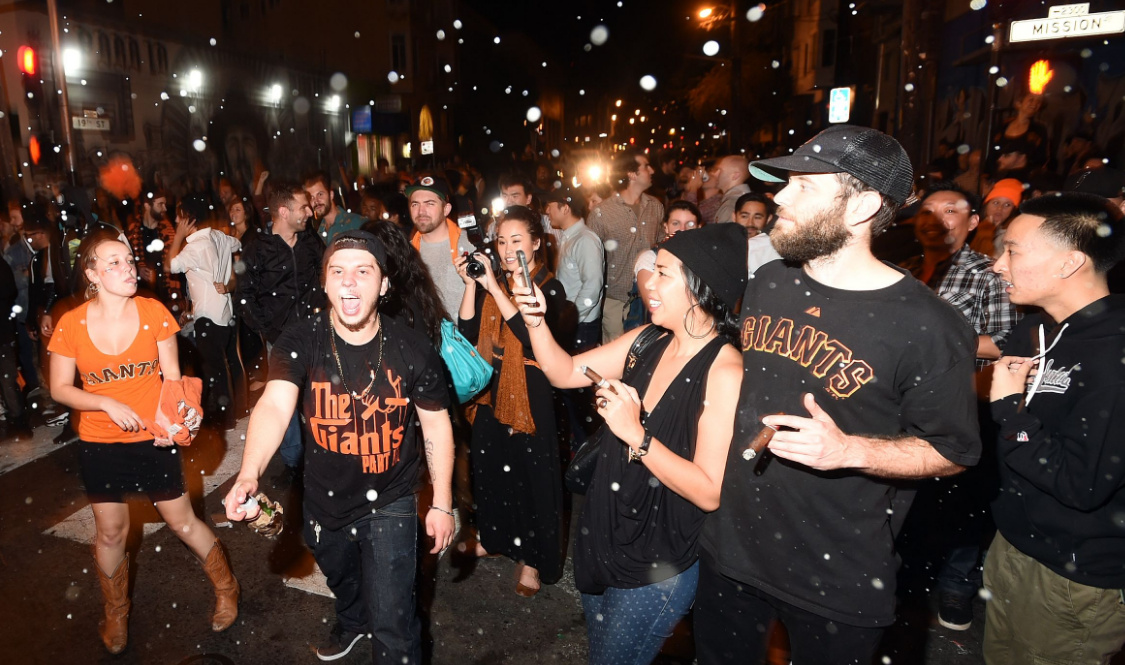 Watching the end to last night’s Game 6 of the 2016 NLCS between the Cubs and Dodgers was a fascinating experience in baseball voyeurism. So many things went through my mind as Yasiel Puig’s season-ending double play gave the Cubs their first pennant since 1945. First, How poetic that one of the most polarizing figures in Giants nation should hit into that fateful double-play snuffing out the Dodger season after a very bad start by Clayton Kershaw. Second, the ensuing celebrations made me think of the scene in San Francisco and across Giants land when Brian Wilson struck out Ryan Howard with a perfect pitch in Game 6 of the 2010 NLCS. The delicious knowledge that the Dodgers would go another year without a ring was eclipsed only by my excitement for the city of Chicago.

For Your Viewing Pleasure: “Strike 3 Called!”

Regardless of one’s allegiances, witnessing the scene of bliss across Chicagoland, so aptly captured by the Fox telecast, was memorable as it inspired a meditation on my part about the relationship between sports and culture. Yes, we probably take things too seriously as diehard fans. But what makes scenes like last night’s Cubs celebration so poignant is how they illustrate a shared belief and passion for a city or a group of fans. Last night baseball transcended itself and went beyond sports to inspire joy and pandemonium for long-suffering fans of the Second City.

Jayson Stark wrote a nice article about last night’s win. In that piece you will find a great quote from Ryan Dempster:

“This transcends baseball. You know how many people I saw cry tonight? People crying. People hugging each other. This is far more than a baseball game. I don’t know how to put it into words, except it’s an event in these people’s lives that they will forever remember. And to be here, to watch it all happen, was just incredible.”

As someone who is born in Montreal, and as many long-suffering San Francisco Giants fans can attest, many passions and sports allegiances are handed down over generations and are not choices. The Canadiens are for Montrealers, not a choice, not just a hockey team, but part of who we are as a people. They are part of the very fabric of French Canada and the city of Montreal.

Sports teams in places like Pittsburgh, Chicago, New York and San Francisco retain powerful relationships to a city’s and region’s identity. They are cultural signifiers that unify a town, a family or generations of people over many years and seasons of heartbreak and disappointment. When a championship does arrive, all the suffering and disappointment only add to the joy.

Let’s remember Giants fans, we have been spoiled these past seven seasons. As Matthew remarked in typically humorous Matthewonian fashion: “This is how the other 99% lives” referring to sublime agony of watching another team compete for a World Series while we sit at home disappointed and waiting for next year. Winning a World Series is arguably the most difficult task in team sports. Winning 3 in 7 is absurdly beautiful.

The Cubs haven’t won a World Series in 108 years and they have not yet won the 2016 version so all that joy in Chicago may come to a screeching halt at the hands of the Indians, another long-suffering sports town. This World Series has many fascinating narratives as we Giants fans wonder what if….

I think this is the year of the Cubs and there is no stopping them. While they are not an unbeatable or perfect team, they are confident and strong from top to bottom. To me, the most impressive accomplishment is the evolution of the thinking and culture around the team that Theo Epstein and Joe Maddon brought with them from their previous successes. The Cubs believe they are winners now. That is what makes them most dangerous. Last year’s Cubs team, like the 2014 Royals, was not yet ready to believe they were World Series Champion-worthy. This year is different and watching this theater unfold is a spectacle unto itself that reminded me of San Francisco in October of 2010.