Baseball’s Dignity and Grace, Jose Fernandez, and the Miami Marlins 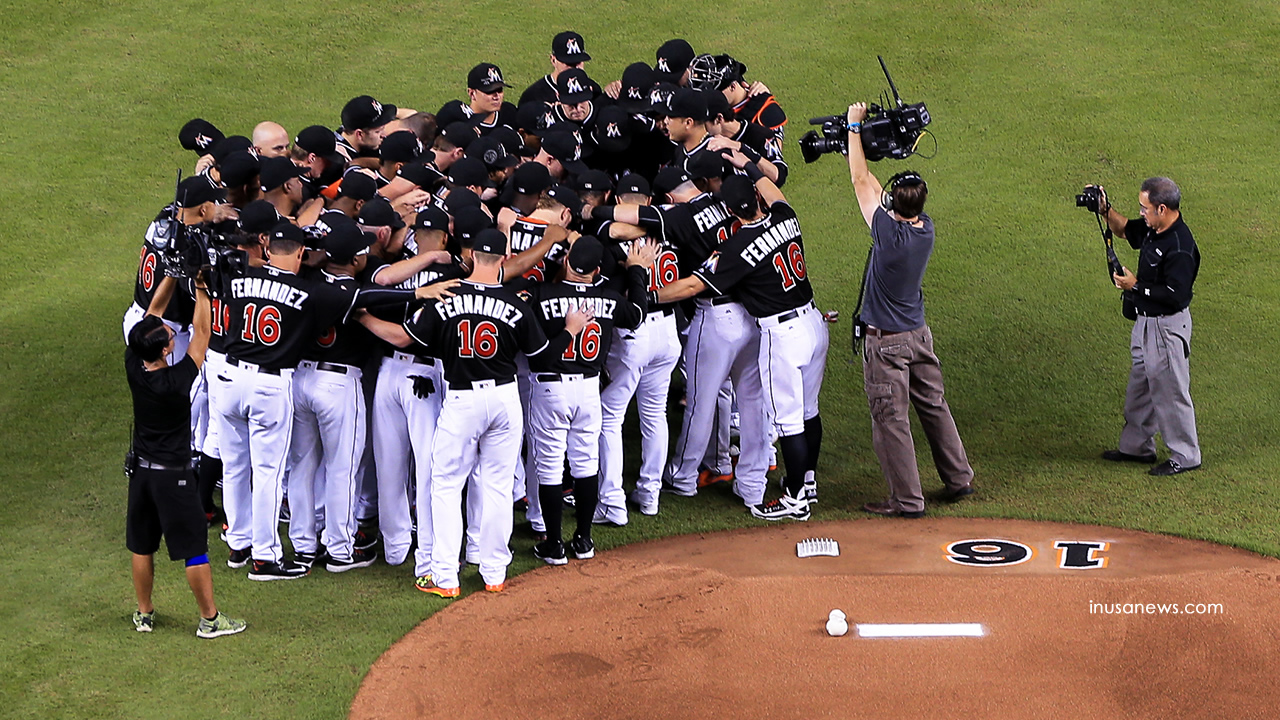 With the tragic death of Jose Fernandez the baseball world mourns in its unique way. Last night, in their first game since the star pitcher’s fatal boating accident, The Miami Marlins commemorated their teammate in a series of powerful and moving gestures before and during the game against the New York Mets.

The Marlins Come Through

First, they announced they would retire Fernandez’s number 16 after every player wore the number with “Fernandez” on the back of their jerseys. Evidently it took a small miracle and some fast maneuvering for Majestic to fabricate and deliver the uniforms in time for the game.

Second, the Marlins conducted a beautiful ceremony before the game with a lovely rendition of “Take Me Out to the Ballgame” played on a lone trumpet by a color guard. Just before the game the team convened on the mound and inscribed their own personal messages in the dirt around the rubber, to their former teammate. The sight was spectacular. Each player had written their own dedications on their caps as well.

Third, to start the game, Dee Gordon, the left-handed leadoff hitter for the Marlins, positioned himself for the first pitch of the game wearing Fernandez’s batting helmet, from the right side of the plate. After taking a pitch he switched back to his customary left-side and promptly hit a home run. The second baseman rounded the bases in tears and was mobbed by his teammates. Importantly, the Marlins won the game 7-3. The sight was made for Hollywood. It was magical and unforgettable, a moment only baseball could provide.

Innocence, Honor and Contemplation in Baseball

During the broadcast, Marlins color analyst Al Leiter remarked that baseball is unique to all other sports for the simple fact of how many games are played and how long the season is. Players become a family and get to know each other in very intimate and emotionally powerful ways. I believe this is true for fans as well. The game of baseball provides for a level of innocence and contemplation not found in hockey, football, basketball or any other team sport. It’s history and its pace make for an experience that bestows dignity and grace on the relationship between fans and players. Anyone who loves baseball was surely grieving over the news of Jose Fernandez’s death. Anyone who ever watched him pitch or who knew the basic elements of his life story and his work in the Miami community would feel this loss to the game we love and to his family.

The Marlins were in a terrible position yesterday. They had to play a silly game with bats and balls while in unconscionable grief. Then they had to honor their teammate and friend in front of the eyes of the sporting world. They succeeded with humility and grace on both counts. They deserve a tip of our collective caps. Let’s remember Jose Fernandez for the great player and the fine young man he was. Let’s celebrate the unique qualities that only baseball offers us when we think about this game and what it means to each of our lives.