Cactus League, Game 2: It’s always a good day when the Giants beat the Dodgers, even in February 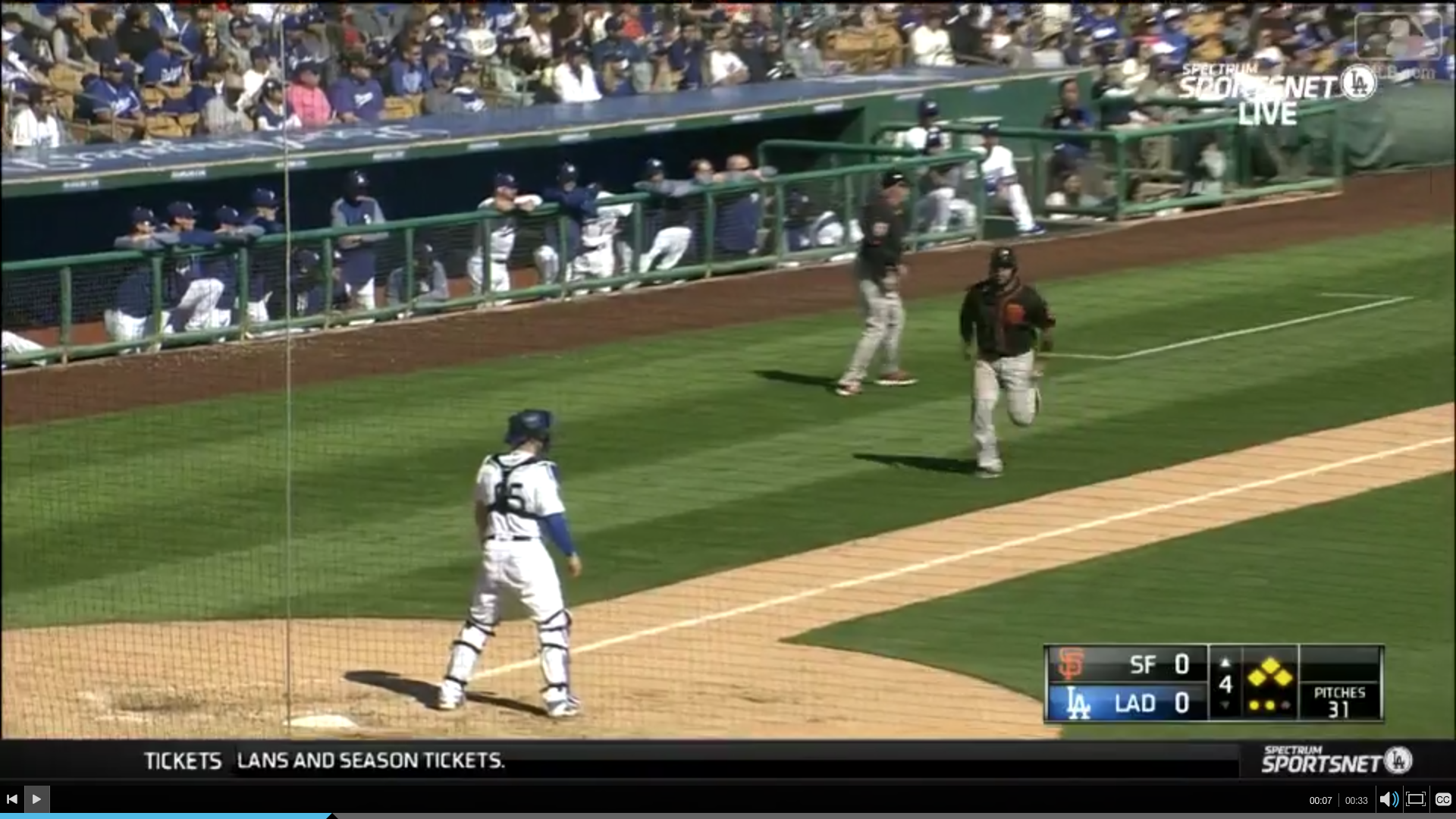 I cannot overstate how much I enjoyed watching the Giants game yesterday. I know it’s spring training and the games don’t count for more than a month yet, but the Giants beat the Dodgers. Put a smackdown on them, in fact. More importantly, I was relaxing on a Saturday afternoon, watching my team play baseball after nearly five cold months. Not even the Dodgers’ announcing team could dampen my enthusiasm. I usually multitask on my iPad quite a bit while watching baseball games, but not this time–I just watched the game and only went to the iPad during commercial breaks. It was just great. So happy to be heading into spring!

So a few notes about the game. Here’s the complete set of video highlights. (MLB.com seems to have changed how it posts video clips. I’ll have to get a lesson from GG about how to embed them into posts now.)

As we all know, the last two spots in the rotation are at least somewhat up for grabs. Stratton, Blach, Suarez, and Beede all have a shot–indeed, I wouldn’t be surprised if this turns out to be a fluid situation and all four of them end up making starts for the Giants this season. A week ago I would have thrown Gregorio into the mix, but the team taking him off the 40-man roster probably makes that unlikely. (That’s interesting, by the way. Gregorio was the best starter on the River Cats before his PEDs suspension last season and was a well-regarded prospect until that point. Did they bail on him just because of the suspension?) There’s still Derek Holland to consider, too.

Anyway, after two games, the battle is a stand-off: Blach, Suarez, and Stratton all looked really good in their scoreless two-inning stints. If anything, Stratton, who likely has the inside track to one of those spots after his strong last two months of 2017, was the shakiest, having to pitch out of a bases-loaded jam in the second inning. But pitch out of it he did, freezing Chase Utley and his “Mona Lisa smirk” (Baggarly) for a called strike three to end the inning and his day.

There’s a long way to go, and I’m really looking forward to seeing Beede’s first outing, too (tomorrow, I’m guessing–today is Bum, Tuesday is Samardzija, and Cueto’s being slow-played because of the flu he had a week or so ago). Hard to handicap at this point. Suarez is not on the 40-man roster, so that might decide things. On the other hand, the Giants may want Blach in the bullpen until Will Smith is fully ready to go. Alex Pavlovic had a podcast in which he interviewed Suarez (starts around 13 minutes in; the first part is Tyler Cyr), and he mentioned that the organization is high on Suarez. I’ve wondered all along if he’s why they believed they could take the risk of trading Matt Moore–notwithstanding Moore’s terrible 2017 season, he’s an experienced lefty starter, and cutting ties with him was a bit eyebrow-raising.

After two games, the 2012 compadres–Pablo Sandoval, Hector Sanchez, and Gregor Blanco–have five hits, including two home runs and a triple. (Time for Gorkys to step up. He was 0 for 1 with a walk in the first game, but he’s in the starting lineup today.) I thought both Blanco and Hector looked great at the plate yesterday. Blanco worked an eight-pitch AB for a leadoff triple to start the game, and he doesn’t look like he’s lost any speed, either.

Mac Williamson had a very nice game, starting with an RBI single that somehow plated Hector Sanchez from 2B. (That’s Hector scoring at the top of the post. They better do an MRI on Joc Pederson’s throwing arm.)

Mac Williamson just ripped a single to drive in Hector Sanchez. "Lumbering" toward home plate would be a kind way to describe what Sanchez just did.

After the RBI single, Mac scored from first on an RBI double by Chase d’Arnaud (the “other brother”). I was impressed by how quickly he got around the bases–that’s something I’ve always noted about Mac–he runs well for a big guy. Then he blasted a two-run homer. He apparently is retooling his swing.

Interesting observation about Mac Williamson: he has always been able to get good backspin on the ball to drive it farther, but it looks like he's added a noticeable leg kick to his swing. Players such as Justin Turner and Jose Bautista have changed their careers around…

Let’s not kid ourselves–Mac is a right-handed hitter with a minor league option left, and he’s never been Bochy’s guy. The only way he’s making this team is if (a) Pence or McCutchen gets injured and (b) he rakes in the Cactus League. I’m certainly not wishing for (a), but it’s prudent to be realistic about Pence. Mac is off to a good start with (b), though. That combination of power and athleticism has always been tantalizing with Mac.

Should be fun–a lot of the “real” lineup today.  Lefty out.

Day after Bochy said Posey being held back by ankle, voila! #sfgiants pic.twitter.com/wEuBRlzBhb