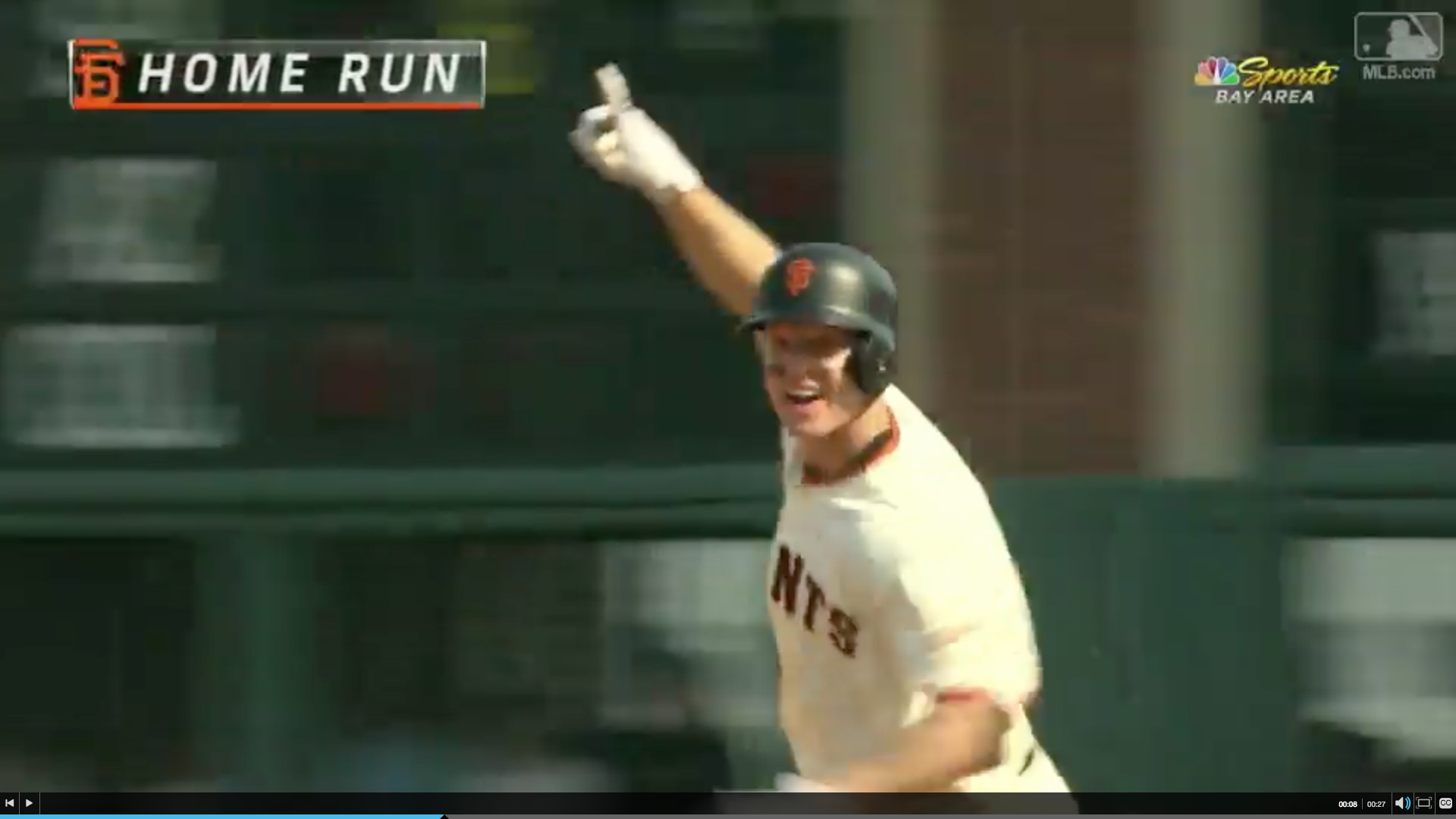 This sure looked like it was going to be another irritating Giants loss. Last night they scored plenty of runs but the bullpen yakked it up. Today they got beautiful, gorgeous pitching for nine innings from Jeff Samardzija and three relievers, yet going to the bottom of the ninth, it looked like another tough-luck loss for Shark, whose only sin was giving up his two (2) hits in the same inning–because his team had only one (1) hit.

But then the magic happened. Let’s break it down by the key figures.

Thanks, Mike, for taking out the guy throwing a one-hit shutout and putting in a reliever whom both Pence and Posey have had success against! (Can anyone say “Matt Williams, 2014, NLDS Game 2”?)

I’ve been rough on him, but he did two things in the ninth inning that I really liked. First, he had Okert and Law pitch the top of the ninth–late in a one-run game that they needed to keep right there. Now, probably that was because he’d used Strickland, Osich, Crick, and Melancon in the previous two games, but I’d also like to think it was a little reward for doing their jobs last night. And they were great, combining to strike out the side (more on Law below). In fact, Gearrin (who pitched the eighth) and Okert/Law went two scoreless, hitless innings with no walks and five strikeouts. Second, Bochy had Pence pinch-hit for Span to lead off the bottom of the ninth. Now, that might seem like a no-brainer vs a lefty, especially one Pence has hit well before, but it’s not necessarily Bochy’s way to pinch-hit for a veteran in a tight game–he usually reserves that kind of treatment for rookies. And it paid off, with Pence getting a hit and scoring the tying run on Posey’s single.

This time you can’t blame Dexter Fowler’s leadoff triple on Span, and not just because Span was no longer in the game. But Sam did a great job of pitching through that leadoff triple in the top of the tenth, also with the help of a good play by some infielder. Kruk & Kuip went to some lengths to explain that Dyson had a nine-day layoff before last night’s disastrous outing and how that’s hard on any reliever but especially a sinkerballer. Point well taken, and good on Dyson to be mentally tough after what happened last night, and he picked up the win for his efforts.

He’s just been incredible lately, and today was no exception. Two hits, an unusual two walks, and 9 strikeouts in 7 innings. He was up around 96-97 with the fastball for much of the game, too. I wish he could have gotten the win, but I’m very glad he didn’t get the loss.

On the long list of “things that went wrong in 2017,” Law is there. He was supposed to be the eighth-inning set-up guy, and instead he spent more than half the season in AAA. He looked nasty today, striking out both his hitters swinging, one on a 96 MPH fastball and the other on a curveball in the dirt. Hope that’s a sign of good things to come for this young man. If he and the guy who replaced him when he was sent down, Kyle Crick, are both ready to contribute to next year’s bullpen, well–that would be really good.

It was a oops-doink to right field, but it tied the game in the ninth, took Shark off the hook, and set it up for…

Catchers unite!  That was a big boy opposite-field home run to walk it off in the 10th, and he and the team looked as happy as if the win had put them into sole possession of first place. It was Johnny Cueto who did the honors of dumping a barrel of Gatorade over him when he was talking to Amy G. Hope Hundley is back next year, but as Alex Pavlovic wrote, he might be able to get another job with more playing time based on the great work he’s done for the Giants this season.

This weekend is the real kickoff for college football, and, rather atypically, there are some great matchups, including Michigan vs. Florida and (as we speak) Alabama vs. FSU. The Trojans gave us a scare before pulling away in the fourth quarter against a tough Western Michigan team (who, it should be remembered, went 13-1 last year and played Wisconsin in the Cotton Bowl–this is not South Dakota State). But the really cool part of the USC game was when they were kicking a PAT after a pick-six late in the game, and…out came long-snapper Jake Olson.

If you don’t know who Jake Olson is, let me give you the short version. Jake was diagnosed with a rare form of eye cancer as an infant and had one eye removed. When he was 12, he found out that the cancer had returned and he’d have to have the other eye removed, leaving him blind. He was a huge USC fan, and Pete Carroll, then the coach, heard about Jake and had him out to practice on the last day he could see. ESPN reporter Shelley Smith followed the story at the time and did some great work reporting it (more on her in a minute). That was in 2009. Jake later became the varsity long-snapper for his high school team, and then he was admitted to USC and joined the football team as a walk-on long-snapper.  He’s a sophomore now, and today was the first time he appeared in a game for his beloved Trojans.

A couple of years after she first met Jake, Shelley Smith was diagnosed with cancer and had a very tough battle. Some years later, she did a video piece on how Jake had inspired her and had reached out to her.  Here’s the video if you’re interested (if you watch it, you’ll find that it’s “dusty” in your house).

Anyway, it was a dramatic and inspiring moment to end the game. Good for USC head coach Clay Helton for keeping his head after a tense game and recognizing the perfect opportunity to call a time-out and bring Jake in for the PAT.

This award is given out with great ceremony on the Friday night of the last homestand of each season. Players, coaches, fans, and Willie McCovey himself vote on the most “inspirational” player on the Giants for the year. It’s a big honor to win it. Current Giants who have won it include Matt Cain, Hunter Pence, Buster Posey, Madison Bumgarner, and Brandon Crawford. There have been times this season where I’ve thought “Maybe they should just skip it this year.” Honestly, there hasn’t been much that counts as “inspiring” this season. As I see it, here are the possible winners:

Earlier in the year, I thought Ty Blach, another bright spot when Bumgarner was out, might have a shot, but his rough patch in August makes that unlikely. I also wonder how the Strickland/Harper brawl might influence the votes: Posey, who was criticized for staying out of it, Samardzija, who was definitely IN it (just ask Michael Morse and Bryce Harper, who saw Shark coming and knows he owes Morse one). It will be interesting to see how this one comes out. It’s been such a very strange year.

OK, back to college football. Enjoy the rest of the holiday weekend, and Lefty out.