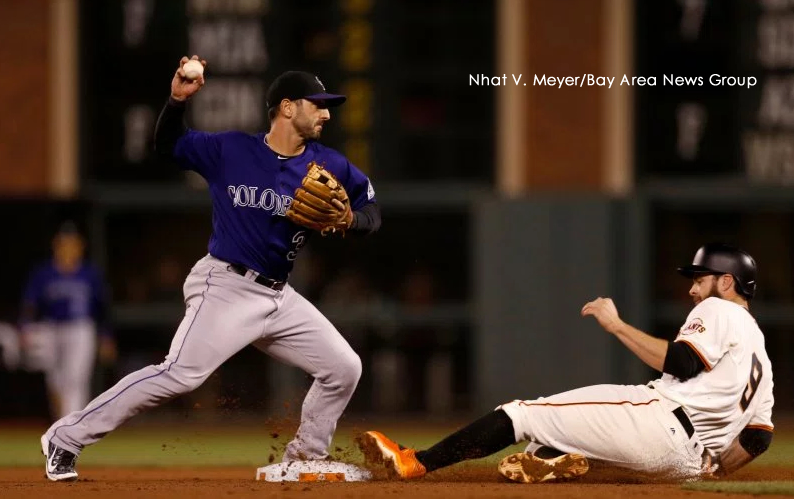 In last night’s game the Giants had the leadoff runner on in six different innings. Each time they failed to score for a variety of reasons: double plays, runners getting thrown out trying to steal, etc. Conor Gillaspie was thrown out trying to steal second base with the pitcher batting in a 3-1 count! It as that kind of night for the Giants hitters. In only the bottom of the ninth were they even able to put a runner in scoring position.

Another Dominant Performance Against the Giants Bats

Tyler Chatwood was excellent. In games when your team has trouble scoring runs it is commonplace to use terms like “putrid”, “pathetic”, “awful”, and “desultory”. We’ve seen this game before, about 20-30 times: Our staring pitcher is brilliant, our team is over-matched by an unknown or some other starter who suddenly pitches like Bob Gibson against the Giants. The Giants have now lost 9 games when leading in the ninth and have never won a game when behind going into the ninth… That should tell you what kind of psychological torture this year has been.

Losses like this represent a challenge to Giants fans. When you get shutout by a great pitching performance it becomes a fine line between blaming your hitters and giving the other team’s starter his due. Tyler Chatwood has owned the Giants this year and surely the team will have to examine its approach against him for next season.

Jeff Smardzija and Our Starting Rotation

Jeff Samardzija was wonderful. His fastball had tremendous life and his change-up was getting many swinging strikes. His line: 6 innings pitched, 7 hits, 2 runs, 1 walk, and 11 strikeouts. Smarge has developed into a legitimate ace for the Giants. With his expanded arsenal of off-speed pitches and his improved command, I dare say the Giants would be confident with him starting the Wild Card game. It appears that our wishes have been granted: Smardzija would harness his other-worldly stuff and develop into a complete pitcher with the tutelage of Righetti and company and the magical environs of Willie Mays Field.

What is so frustrating about this season is this: The Giants now have 4 top flight starting pitchers. The prospects of having this rotation in short playoff series are tantalizing. The catch is, there is no guarantee this team will even get to play such a series. I keep thinking about all those wins we gave away this year… That’s what makes tonight’s game a 98 on the MWQ (Must Win Quotient). I have petitioned the Sabermetrics people to accept this stat into their canon.

The Giants lost a chance to go 2 games up on the Cardinals, who lost last night (Thank you Adam Duval). This leaves us with 4 games left to play: tonight’s game against the Rockies and three against the Dodgers. I don’t know about you but the prospect of the Dodgers knocking us out of the playoffs in our own yard fills me with horror.