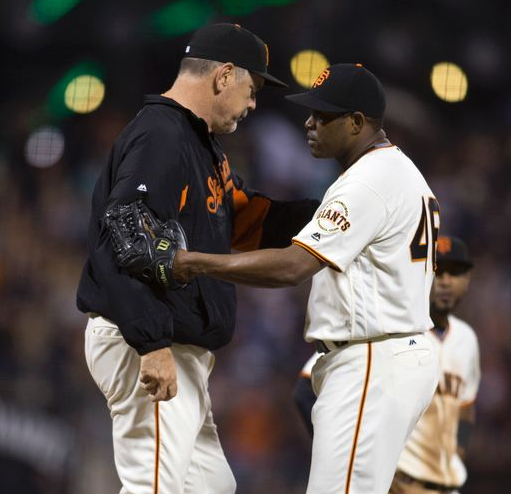 We all need a group hug after that game. Leading 2-1 going into the 9th, the Giants were looking to win their third in a row and keep pace with the New York Mets for the top Wild Card position, and, if you want to get really ambitious, keep pace with the Dodgers who beat the Arizona baseballers again.. Our poor bullpen. At this stage, there is no reason for me to list the blown saves, to document the leads and games the Giants bullpen has blown this year.

Surely we are leading the world of baseball in leads lost, games coughed up, and broken hearts.

Jeff Samardzija pitched 6 2/3 innings allowing only one run on five hits. He was very good. After three innings in which the Cardinal leadoff hitter reached base each time, Smarge took control and found his command. His fastball was lively and his changeup was devastating. Mike Leake junk-balled the Giants to death. If I am an opposing scout analyzing the Giants for a potential postseason matchup this is what I tell my pitching staff: Keep throwing off-speed stuff in any pitch in the count. Throw 75% curve/slider/changeup/whatever and 25% fastballs.

I have come to the conclusion that the Giants are an obvious fastball hitting team. Leake was tough and the Giants, though running into some bad luck with hard hit balls, went down meekly more often than not against their former teammate. Joe Panik is scuffling. Brandon Crawford’s bat has cooled (though his glove is still golden) and the Giants hitters simply could not get enough runs across to give the pen a cushion.

Santiago Casilla had another difficult outing. Let’s give him a hug too…. It now seems likely he will not be re-signed and the Giants front office must look for a frontline closer this offseason. It is still fashionable in baseball analytics to say the closer is an over-rated concept. But after so many blown saves, I am sure the Giants fans would now disagree.