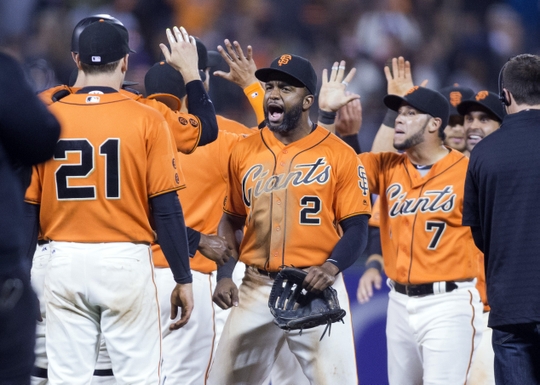 The Giants rode a magical bottom of the 6th inning to victory behind huge hits from Conor Gillaspie (2-run double), Madison Bumgarner (2-run double), and Brandon Belt (2-run homer). Brandon Belt hit a surface to air incendiary device that nearly mortally wounded the center field camera man to top off a 7-run outburst to put the Giants ahead 9-3. The hit brought forth the party and the Willie Mays Field crowd unleashed months of frustration into pure un-adulterated, reverse osmosis-filtered joy.

The Giants Get That Championship Blood Flowing

After questioning the heart, the resolve and the fight in the Giants for more than 2 months, fans whose faith was wavering discovered a new-found spirit of optimism and energy in our beloved team after a clutch performance by the line up and Madison Bumgarner. Tension was everywhere in this game beginning with Buster Posey getting in some words after striking out against Rich Hill in the 4th inning and ending with Brandon Belt getting hit in the hand in the bottom of the 8th. In between Angel Pagan body slammed a fan who ran onto the field. This was not your average garden variety baseball game. The Playoff atmosphere was evident from the first pitch.

When Your Ace Is an Ace Without His Best Stuff

While Madison Bumgarner was not dominant, he found his groove after allowing two first inning runs. He pitched 7 1/3 and contributed mightily to the offensive joy with his aforementioned double and a single in the top of the 8th. His performance was Ace-like though he was not his sharpest. When the Giants responded with 2 runs in the bottom of the first new life was generated in the crowd and in their starting pitcher.

Conor Gillaspie’s 2-run double with the bases loaded in the bottom of the 6th inning may have been the most important at-bat in the regular season. The Giants were trailing 3-2. He took two close pitches off the inside corner to leverage a hitter’s count. The 2-0 pitch was lasered down the right field line. That pitch was only inches closer to the plate than the previous two. All three were fastballs by Brandon McCarthy. When you have the bases load in a critical situation it becomes paramount for a hitter to avoid getting overly aggressive and swinging at pitchers’s pitches. Gillaspie has proven to be a cold-blooded professional hitter with power off the bench. Bruce Bochy’s faith in him was rewarded.

Bochy’s Faith in His Players

Speaking of faith, we were all wondering why, in that same inning with the Giants already leading by 4, Bochy sent Denard Span to pinch hit for Gorkys Hernandez. After Span singled to continue the rally it dawned on me: the manager was making a statement to his team and to his veterans: Everyone is crucial to our success, everyone will play their part. It was a vintage Bochy move topped only by putting Santiago Casilla in to pitch the ninth inning. The once and former closer would pitch a perfect inning to put the Dodgers away and give the Giants one of their biggest wins of the season on a night they had to prevail to keep pace with the Cardinals and Mets, both of whom won.

This was a big game and the second in a row the Giants came back to win after facing significant adversity. This type of victory is what champions are made of.