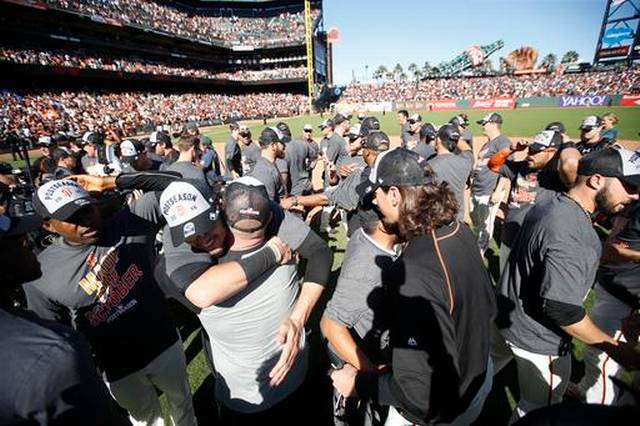 In what was a memorable day at Willie Mays Field, the Giants completed a three-game sweep of their rival Dodgers with a dominant 7-1 victory. Matt Moore was fantastic, pitching 8 innings and allowing only 1 run on 3 hits, striking out 6 and walking 2. For arguably his biggest start of the year the newly-acquired left-hander flummoxed the Dodgers with fastball darts and devastating change-ups. Getting ahead of most of the batters he faced Moore was able to induce weak contact when he wasn’t striking out the rivals from Los Angeles. He was efficient and ace-like enjoying many 1-2-3 innings and attacking the Dodger hitters with a variety of fastballs both up in the zone and on the inside corner. Once Moore retired the Dodgers without giving up runs in the top of the first one could sense the Giants fortunates turn from overcast menacing grey to sunshine and blue skies, mirroring the weather patterns over the course of the game.

Following up exquisite games from Madbum and Ty Blach, the pressure was on for Matt Moore to keep the Giants in the game on the final day of the regular season. The game felt like a playoff classic from the first pitch. With the season on the line the Giants smashed their way to a 2-0 lead in the bottom of the first on a Buster Posey single. The hits and runs kept coming with huge at-bats from Denard Span, a two-run triple, and a two-out run-scoring single from Buster posey in the bottom of the second inning to get the Giants jubilation flowing throughout Willie Mays Field.

The Giants and Their Fans Bestow Their Love on Vin Scully

I watched the CSN Bay Area telecast with Vin Scully calling the game for both the Dodgers and Giants in the 3rd inning. It was a lovely look at the broadcasting legend and the love bestowed on Scully from the crowd and the Giants broadcasters was nothing short of touching and awe-inspiring. It was another glimpse into what makes baseball so special and so unique in all the sports of the world.

Once the Giants rushed out to a 5-0 lead Dave Roberts decided to pull his starters one-by-one and essentially concede the game. The party was on and the Giants cruised into the second Wild Card with a convincing victory and sweep of their arch-rivals. The game accomplished more than clinching a playoff game against the Mets. It also continued the Giants’ momentum into the postseason after a trying second half of baseball. Now the Giants are a legitimately hot team gushing with a new-found confidence that is reminiscent of their championship seasons.

The sweep of the Dodgers, which gave the Giants an 11-8 season series win, was crucial since the Cardinals won their game against the Pirates. While the Giants pitchers were excellent throughout the home-stand, their bats came alive in critical moments to provide superb situational hitting, timely singes and doubles, and constant pressure on the opposition. The Giants defense, arguably the best in the Major Leagues, played close to flawless baseball.

It turns out the Major League postseason arrived a week early in San Francisco and one gets the feeling that the Giants were waiting for this moment of urgency to shine their brightest in what was a mostly sullen and dreary post-All Star break sequence.

If there is one lesson to be learned this year it is that one never knows exactly what path our team will take to get to the postseason. Regardless of the path, the destination is all that matters.