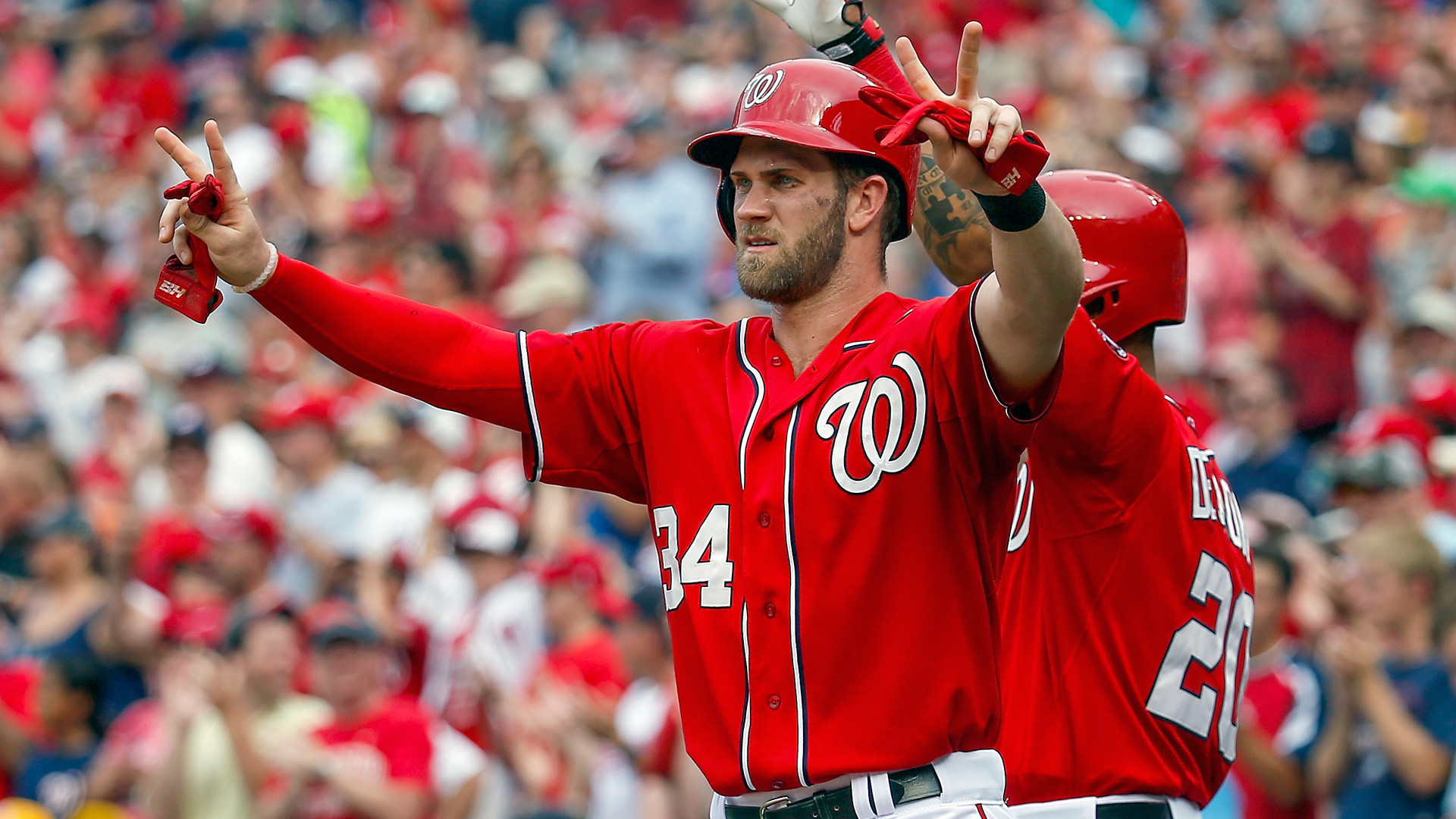 I’m with Grant Brisbee: there are more important things to worry about today than another dreary Giants loss.  But it is International Left-Handers Day, so let’s celebrate some lefties. And in the spirit of unity (all hands matter), I’m counting, just for today, baseball players who hit left-handed even if they’re not natural left-handers.

I’m not going to link the video. It’s too gut-wrenching. If you want to see it, Google it.  But let’s hope it’s not as bad as it looks and he’s back for the playoffs. Love him or hate him, Bryce Harper is one of the faces of the game. And I hope no one enjoys seeing a young athlete sustain a serious and agonizingly painful injury like that. Godspeed, Bryce.

Pretty much the only good moment of the game for Giants fans, which was delayed by three hours of actual weather followed by more human rain delay (looking at you, Edwin Jackson), was the second AB of the night.  To provide some perspective: The Giants and River Cats started at exactly the same time, 7:05 p.m. We watched the entire River Cats game, then fireworks, then walked out to the car, then a 25-minute drive home–and were in our house before the bottom of the eighth inning ended in D.C. Yowza!

Another fake lefty like Panik and Harper, but see my editor’s note above. He made a couple of great plays at first base, one of which ended with the Harper injury, which I already said I’m not going to link. But here’s another one.

OK, now on to a real lefty. As I mentioned, we were out at the River Cats game, and as 2017 is wont to do, a brilliant outing turned into a gut-punch loss–literally, Tyler Rogers needed one more strike for the save, we were all on our feet getting ready to celebrate…and then, boom.  Before that, though–Suarez looks like the real deal. Four different pitches he can throw for strikes, great command and poise, fastball that sat at 93-94 all night, even in the ninth inning when he’d gone over 100 pitches.

Suarez got a huge ovation from the large Saturday night crowd in Sacramento when he was pulled with two on, one out, 105 pitches, and a 1-0 lead. We sit behind the River Cats’ dugout on the third base side, and he didn’t even look up as he left the mound and headed into the dugout. He was too mad that he couldn’t finish it. I felt bad for him but I liked seeing that. He’s a competitor.  That guy needs to be in the Giants’ rotation.

…he’s not one of my favorite lefties, but you can’t choose your relatives. Not only did he actually mention on the postgame show that Harper’s injury is a blow to his fantasy team (!!!), but he also spilled a bit of info that I bet wasn’t supposed to be for public consumption:  Mark Melancon told him that his elbow still isn’t 100%, and Estes, a former pitcher who had some sore arm issues in his career, said he could tell that Melancon’s arm is hurting because of the lack of snap on his pitches.  Why Melancon is even throwing a pitch if he’s not healthy just boggles my mind. Thoughts occur:  Is it simply that he’s a responsible guy who has too much integrity to cash huge paychecks without working for him?  Or is the answer to “why is Melancon even pitching” two simple words:  Sam Dyson?

The lefty who got the save in last night’s game is also an alumnus of the University of Virginia and is known as one of the more thoughtful, articulate players in MLB right now. He had some things to say about what happened at his alma mater this weekend. It’s a whole thread worth reading.

Games 2 and 3 of the triple-header

So Game 3 will be started by our flaky lefty, who reportedly lobbied to make this start when Bochy suggested maybe he should skip one and work on some things. I like that he wants the ball. Better bring it tonight, Matty Moe–because there’s another lefty in Sacramento that’s about ready to take your job.

It’s hard to be very optimistic about a doubleheader started by our two weakest rotation links played on no sleep, but it’s still Giants baseball, so enjoy. And buy a lefty a beer today.

Thoughts and prayers to those injured and the families of those killed in Charlottesville. I’ll take us out with the song from the closing credits from “O Brother,”–“Angel Band.”  Lefty out.