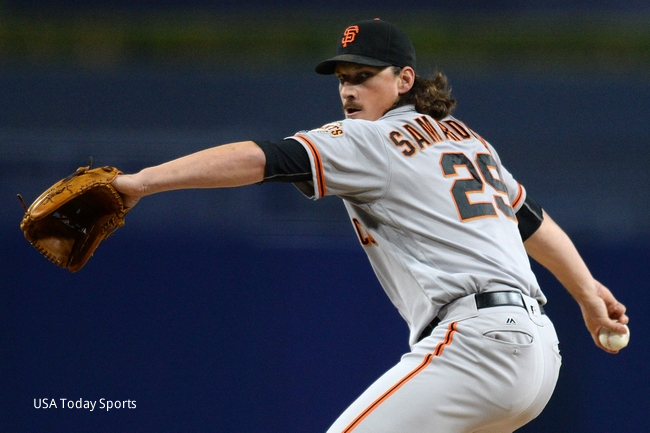 The Giants hitters continued their sleepwalk through the order, making Christian Friedrich look brilliant. Or maybe we have this all wrong? Maybe opposing pitchers elevate their game against our hitters? Maybe it’s something in between? Whatever the case may be, the Giants continued to make weak, lazy outs though 7 innings, except for a double by Gorkys Hernandez. Friedrich was effortless in putting up zeroes through seven innings. The Giants were sleep-walking until Joe Panik opened the 8th with a ground-rule double and was driven in by a seeing-eye pop up from Angel Pagan. Hunter Pence macerated a baseball down the third baseline to add an insurance run with two outs in the inning.

Buster Posey looked lost at the plate but was brilliant behind it, framing pitches for strikes and throwing out a runner trying to steal second to end the bottom of the 7th inning.

With the continued offensive funk by the team, Major League baseball has been tasked by the Attorney General to investigate the Giants’ sudden inability to hit baseballs with any authority. It appears former Senator Tom Daschle will chair a special committee. His first witness will be Hensley (Bam Bam) Meulens.

Senator: Mr. Meulens, can you explain the sudden end of hard hit balls by your baseballers? Has your team been infiltrated by the Communist Party? Can you explain your trips to Cuba?

Bam Bam: We have had tough luck since…(interrupted)

Senator: How would you characterize your relationship to Donald Trump?

Senator: What answer do you have for such a putrid showing at the plate by your team? Do you believe in God? Do you think it is right and proper for ticket-holders to bear witness to such an immoral, unnatural, and downright apocalyptic display of batting by an American baseball club? Do you believe in Capitalism? Free Enterprise? The American Pastime and the right to bear arms? Sir?

Jeff Samardzija pitched heroically. His line: 7 innings pitched, no walks, 9 strikeouts,  no runs,  and a mean display of dancing fastballs curling around the edges of home plate and paralyzing the Padres. His curveball was effective and his command was exquisite. He looked Ace-like. Despite the homer given up by Derek Law, the Giants hung on with a score-less ninth by Sergio Romo, our new/old closer, and escaped with a victory and a modicum of self-respect.

I could write so much more about the mystery of the missing runs but what’s the point? Either the Giants will hit or they won’t. Don’t expect much of a postseason sojourn without production from Buster, Belt, and Craw… Starting pitching and defense are carrying this team. Suddenly it’s 2011 again.