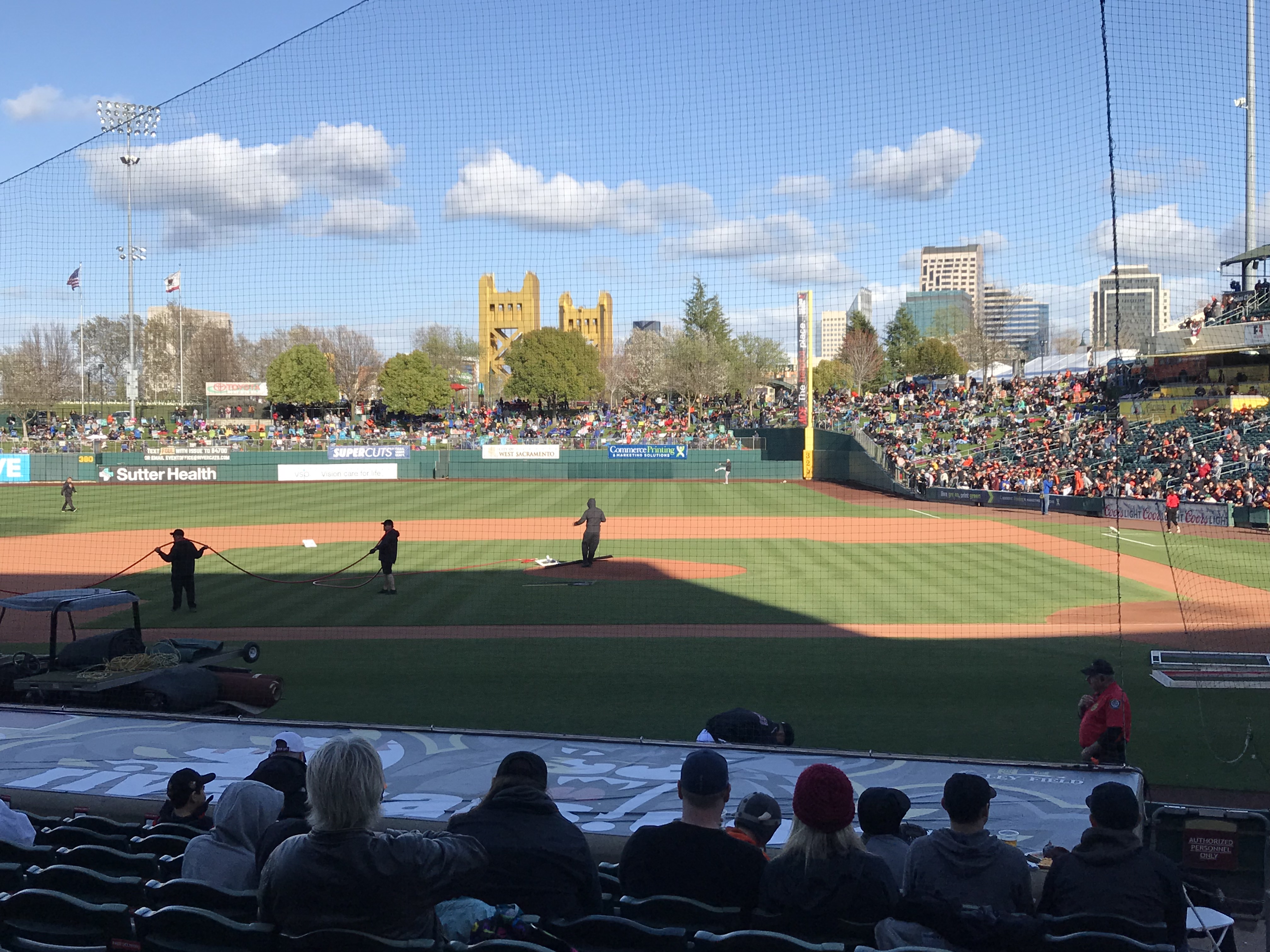 OK, confession time: We didn’t make it all the way through last night’s game. It was c-c-c-old. Props to the Sarcastics–Mr. S. sent me a photo of them with the postgame fireworks behind them, so I know they stuck it out. We bailed to the Legacy Club after the fifth inning (and we were not alone up there) and drove home in time to see the end of the eighth inning and the top of the ninth on local TV. More on that in a minute.

This general confusion led to the following exchange on TV during the bottom of the eighth, which inspired the title of this post.

Bill Laskey (doing guest analyst duties): That’s not Derek Law. (He was right. It was not.)

PxP guy, fumbling through his media guide: OK, #95…it’s Reyes Moronta! (It was not Reyes Moronta. It was a white guy with a beard and less girth than Reyes Moronta. Oh, and Moronta was on the River Cats last night, not the Giants. Indeed, if you look at the line score above, he earned the save for Sacramento.)

They never did figure it out, and neither did MLB At-Bat. In fact, if you look at the box score for last night’s game, it still lists Derek Law as the guy who got the last out in the eighth inning. It was not Derek Law, I assure you. Mr L and I went scrambling for the list of who was available to pitch for the Giants last night. By process of elimination, we’re pretty sure that the guy who came in and quickly struck out his one hitter, stranding a couple runners, was Pierce Johnson. EDIT: It was NOT Pierce Johnson, who pitched today in Oakland. So I’m stumped now. #95 for the Giants last night, who ARE you?

Similarly, after bailing like the California wimps we indubitably are, we were listening to KNBR’s broadcast in the car on the way home from the park.

Family members in the car with me:  How did you…?

Me: I remembered who was in the pregame introductions. Had to be Jebavy.

Mr. Lefty: Remember, she counts cards, too. (I’m an excellent Hearts player, if I do say so.)

My sister: That’s right. She does.

A couple of notable River Cats

I know nobody really cares about the outcome of the game. It was long, sloppy (22 hits, six errors between the two teams), and–did I mention?–COLD. But here are a couple of minor leaguers who caught my eye.

Shaun Anderson warming up before his “Giants debut.”

#2-4 are all worth noting. The Giants are going to need to add pitchers to the major league staff, and all three of those guys are already on the 40-man roster. Remember those names.

Madison Bumgarner had “successful” surgery yesterday (good–they didn’t accidentally cut off his pinkie), and the Giants hope to have him back by early June. Jeff Samardzija hopefully will miss just 2-3 starts, but it’s hard to tell with that kind of injury. According to Alex Pavlovic, through April 10, the rotation will go like this: Blach, Cueto, Stratton, Holland. Yes. That means Ty Blach not only gets the ball for Opening Day at Dodger Stadium but also for the home opener on April 3.

And we ask: why?  Of the four ambulatory members of the rotation (which includes a guy who 72 hours ago wasn’t even sure to make the team, let alone the rotation–Derek Holland), Blach has arguably pitched the worst in his late Cactus League outings. Why didn’t the Giants juggle things after the two injuries so that Johnny Cueto, who has pitched many Opening Days and started off playoff series for the Reds, could take the ball against Kershaw?

The only thing we (Mr. Lefty and I) can figure is that the Giants don’t want to burn Cueto in a Kershaw start. And to be fair, Blach’s career numbers against the Dodgers are excellent (7 games, 4 starts, 36.1 innings, 2-2, 2.23 ERA). Or maybe they just feel they need his bat in the lineup.

Giants not ready to announce it yet, but Ty "I have a .600 batting average against Kershaw" Blach will start opening day.

At this point, the Giants’ rotation is such a mess that you almost have to shrug your shoulders and say “Yeah, whatever,” and just hope for a few surprises–kind of like Warriors games recently, with all four of their All-Stars injured. Alex’s article (linked above) also says that the Giants are not looking to sign free agents and plan to promote from within (mentioning Beede and Suarez in particular). On the radio last night, Dave Flemming was saying the same thing–the Giants tried very hard to stay under the CBT this winter, and they’re not likely to give up on that now. I concur. No need to make short-term panic moves that are unlikely to move the needle much and that might hurt the future.

This odd/sad state of affairs led to this Dan Brown tweet last night (answer at bottom of the post):

A little #SFGiants trivia … Who was the last pitcher not named Madison Bumgarner, Matt Cain or Tim Lincecum to make an Opening Day start?

If you’re a Giants fan going to the game, I advise you to either wear neutral gear or take BART:

Be careful what you yell entering the parking lot tomorrrow, Giants fans: pic.twitter.com/Hv4jMZZiiN