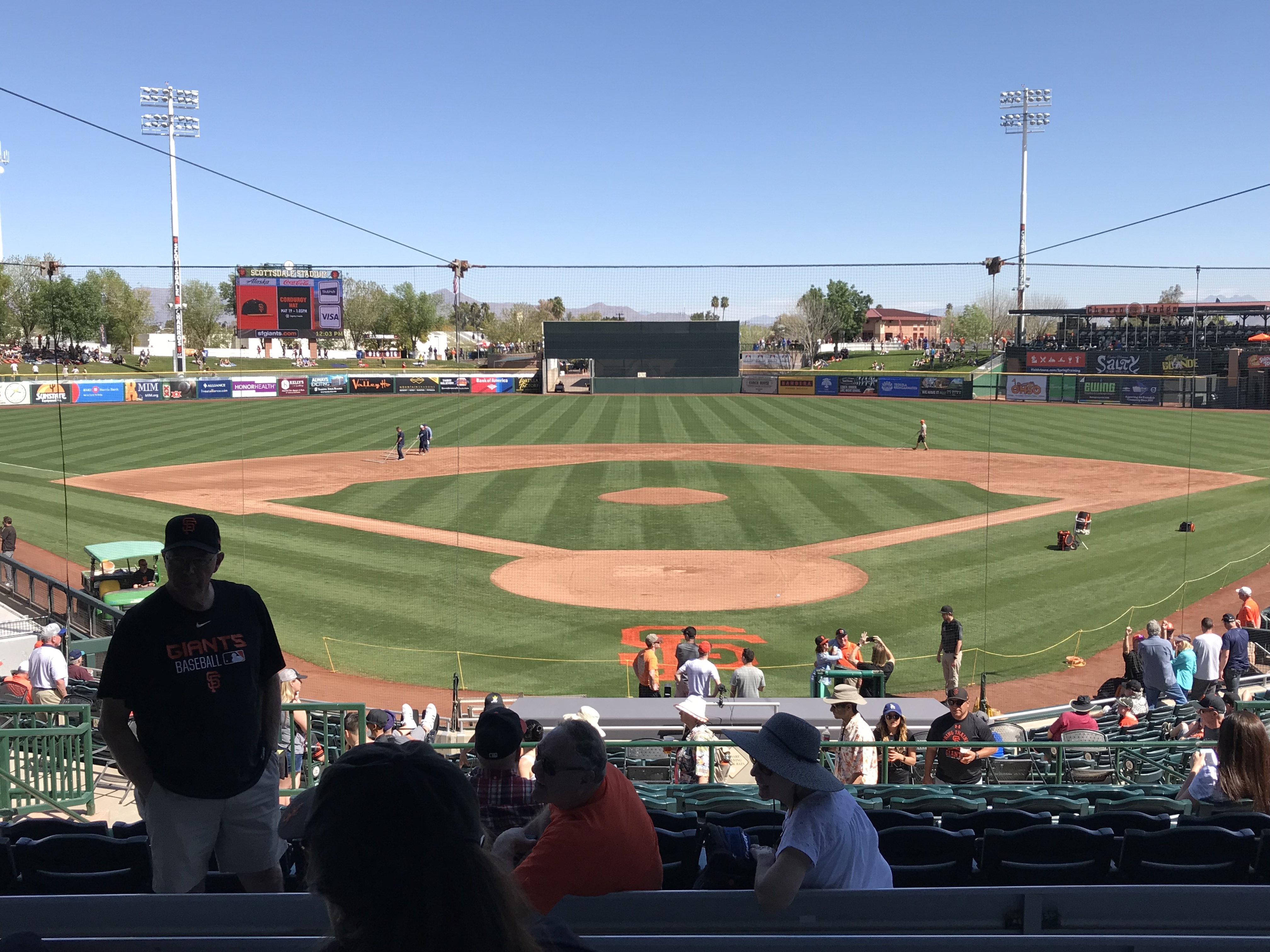 It was a picture-perfect day in Scottsdale–especially from our seats in the shade (veteran move)–and there was a packed house at Scottsdale Stadium. A lot happened, so let’s get to it.

The ball was, um, carrying

As you can tell from the line score above, it was one of those warm, dry, thin-air Arizona days. When Dee Gordon (11 career home runs) hits two by the fifth inning, you know the ball was carrying. After eight total home runs, you began expecting every ball in the air to leave the park. Very different experience from watching a game at The Cathedral in San Francisco!

Here’s Belt’s two-run homer to center; it went over 400 feet, but off the bat it looked like a warning track out.

Jeff Samardzija has some work to do

The reality isn’t as bad as the box score. Of the three homers the Shark gave up in the third inning, really only Gordon’s–a no-doubter just down the right field line–would have for sure been out elsewhere. That said, the Mariners were making hard contact off Samardzija the whole day. I saw where Matthew commented during the game that maybe he throws too many strikes. You wonder if the “I never walk anybody” thing has gotten into Samardzija’s head, and not in a good way.

Buster Posey, on the other hand, doesn’t need spring training

It was great to see Buster out there, and he went 3-for-3, including two doubles. He now is hitting .800 in the Cactus League. Now, his second hit, a doink single that dropped in front of a statue-like Denard–um, Dee–Gordon, maybe was a cheapie. But overall his timing looks good, to say the least. Here’s his third hit.

The news about Posey having a cortisone shot and an MRI for his ankle? La la la, not listening, not worrying.

It was a good day for the young outfielders

The presumed Opening Day outfield–McCutchen, Jackson, Pence–started the game. It was finished by Mac Williamson, Gorkys Hernandez, and Chris Shaw, with Steven Duggar getting a few ABs as the DH (replacing Hundley, who started the game there). Shaw blasted an impressive home run to right-center; that one was not an Arizona cheapie. Here’s a video of Shaw talking about “trying to do damage” with his power.

Mac scored two runs, one after coming into the game as a pinch-runner for Posey, got a hit, and stole a base. Duggar took a couple nice ABs, driving in a run with a grounder to the right side and drawing a 3-2 walk that helped lead to another run.

It was not such a great day for the old outfielders

If Jackson and Pence are Bochy’s first draft of a lineup to face lefty starters, he might want to write a second draft. They went 0-for-6 with three strikeouts, stranding six runners. McCutchen, batting third, went 1-for-3 with a strikeout. Meanwhile, the lefties further down in the order (Belt and Crawford) had no trouble with the lefty starter, and even Sandoval had two hits off him from the right side.

On the other hand, and after the last couple of years I do not take this lightly, the outfield defense was drama-free. McCutchen made a nice running catch early on. Pence took a circuitous route to one fly ball but got there in time; otherwise, he seemed fairly comfortable in left field. Both of those guys are playing new positions and there will be growing pains, but they are, in fact, outfielders, unlike the–how shall I put this?–infielders who played left field last year.

So Pablo went 3-for-3, the first two batting right-handed against a good lefty starter. He was a last-minute add at third base when Evan Longoria was scratched with a sore foot. But it wasn’t hard to imagine Pablo’s bat playing well off the bench this year or him getting a few starts at first base versus a tough lefty.

He looks reasonably fit, too. We’ve certainly seen him worse.

One of the fun things about coming to spring training is who you might see. On the way out after the game, we saw Willie McCovey in his wheelchair, with a police escort to clear his path. I also was “Thrilled” to spot this guy in the corner of the Giants’ dugout. McCutchen didn’t seem to mind sharing his number yesterday.

Will Clark watching the action from the dugout rail

Also, our seats in the last row of Section 301 were below the press box, and right above us were Javi Lopez and Joe Ritzo, calling the game for mlb.com. During a break in the action, I got a photo and said hi to Joe, telling him he has fans here at TWG. I bet Joe knows that it’s AIR-a-mis, not A-RAH-mis, Garcia, and someone needs to clue in the Scottsdale PA announcer.

And here are the lineups for both games.

#sfgiants vs #angels at Tempe pic.twitter.com/Jr7hTeLeeX

We’re going to the home game in Scottsdale today. Back tomorrow morning with my Day 2 report!