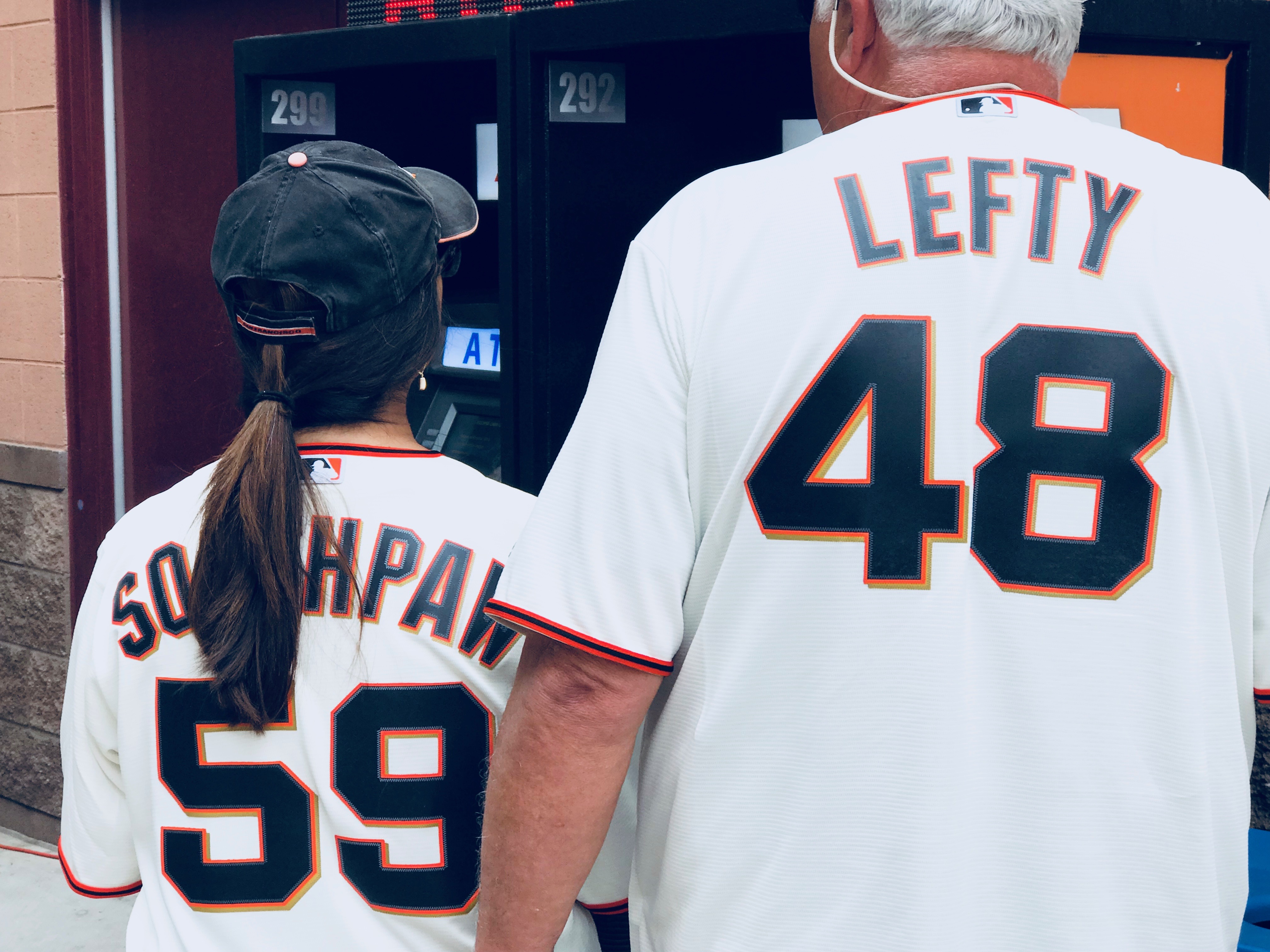 Well, our game wasn’t rained out–but our dinner was! We were astonished to wake yesterday to overcast skies and humid air. We’d been monitoring the weather for weeks before this trip and expected high 70s and sunshine on Saturday.

It turned out we were glad to be in the “shade,” i.e., under the structure, so that we didn’t get wet. It didn’t rain hard enough to even delay the game, but afterwards, I got a call from the restaurant where we’d made reservations and told that our patio table wouldn’t be available due to the rain, and see you another time!  It can be hard to find a place to eat in Scottsdale on short notice on a Saturday night, but Mr. Lefty scrambled and found us a great replacement, an Italian place called EVO. If you’re ever in the area, I recommend it–reasonably priced, nice rustic interior, great service and delicious food. We even were still under the happy hour prices, so we got our wine and our meatball appetizer (to die for!) for cheap-ish.

For the second Saturday in a row, the Giants won both split-squad games. With their recent little surge, they’re now sitting on an 8-7-2 Cactus League record, a lot better than the 2-5-1 they were at about a week ago.

Once again I have to highlight the offense. I looked up the stats last night, and the Giants are leading the majors in every offensive category except stolen bases and walks (and they’re tied for second in both of those categories).

Both starting pitcher prospects, Tyler Beede and Andrew Suarez, struggled, and in both games, the Giants at one point had a three-run deficit (at least). And in both, they rallied late and won. Sitting in Scottsdale Stadium, when they fell behind, I found myself with no doubt they’d score more runs.

I never felt that way when the Giants fell behind last year or the second half of 2016. Remember how they went nearly two years without ever having a ninth-inning, game-winning rally? I know it’s spring training, but this team has a different feel to it.

With two games, there’s a lot to cover, so I’m going with the bullet list.

At the other game, Mac Williamson tripled off #angels starter Andrew Heaney and scored. His reinvented swing has reinvented his chances of making the team. #SFGiants

You KNOW the marketing people are already thinking about their “Big Mac Attack” angles if he makes the team.

How things are shaping up

A week ago, it was easy to dismiss the Giants’ gaudy offensive stats because most of them were generated by the Kyle Jensens and Eury Perezes of the world. Not so much anymore. Other than Pence, the guys expected to be in the starting lineup are having good springs (and even Pence had an RBI single and a good grab in LF yesterday).

The bench? Well, Hundley had three hits–two doubles and an opposite-field homer–yesterday. Pablo’s hitting .348 this spring. Tomlinson’s holding his own after a very understandable slow start. There are lots of interesting choices for the last two spots. This is no Jimmy Rollins/Chris Marrero/Aaron Hill-type spring.

The A-list relievers mostly have looked good. Osich struck out the side in his inning yesterday. Strickland took about 90 seconds to get through his inning. Gearrin was a little spotty with the control but ultimately got through it. Tony Watson was bailed out of the two hits he allowed by two runners being thrown out on the bases, but he’s probably a week behind everyone else. Melancon pitches today.

The rotation is shaping up well, with Bum having a great spring and Cueto looking like his 2016 self in his most recent start. Blach pitches today and Stratton tomorrow, and unless something changes drastically in the next two weeks, they look like they’ll be a pretty solid back end. As for Samardzija, who appears to be the weak link, this article by Schulman notes that the Shark is working on a bunch of new stuff. Perhaps he’s being encouraged by Curt Young, who after all was the pitching coach with the A’s during Samardzija’s best season, 2014.

Dr Lefty’s day at the ballpark

We got there early, so I had some fun opportunities to meet people and take pictures. Amy G was pleased to hear that I teach writing at her alma mater, UC Davis. Tim Flannery talked music-making with Mr. Lefty.

On HaakAway’s request, I got photos of Mike Krukow and Jon Miller in action, since we were sitting near them. Miller saw me taking his picture and gave me the goofy grin you see, followed up by a wave and a thumbs-up.  Kruk was all business.  Oh, and no one can go to Scottsdale without meeting the Lemonade Guy, who’s a minor celebrity here.

Jon Miller in the KNBR booth at Scottsdale Stadium, March 10, 2018

Last but not least: I met Mavo!

Mr. Lefty spotted it on the scoreboard before the game: A notice that our own Mavo (Chris Mavraedis) would be doing a book-signing that day for his wonderful Falling in Love with Baseball that many of us have already enjoyed. I took the opportunity to run out between innings to say hi to him and his wife Elizabeth, and it was delightful to meet them! Here’s a link to his site if you want to know more about him and the book and their fundraising efforts for ALS research.

(Note that with the switch last night to Daylight time in California, the game times in Arizona and CA are now identical.)

If Greek Giant is OK with it, I’ll add a bonus post tomorrow with Day 3 observations. We’re heading to the airport to fly home tonight after the game. So Lefty out for now, but back soon.