The Bay Bombers: Nine Home Runs in One Day! 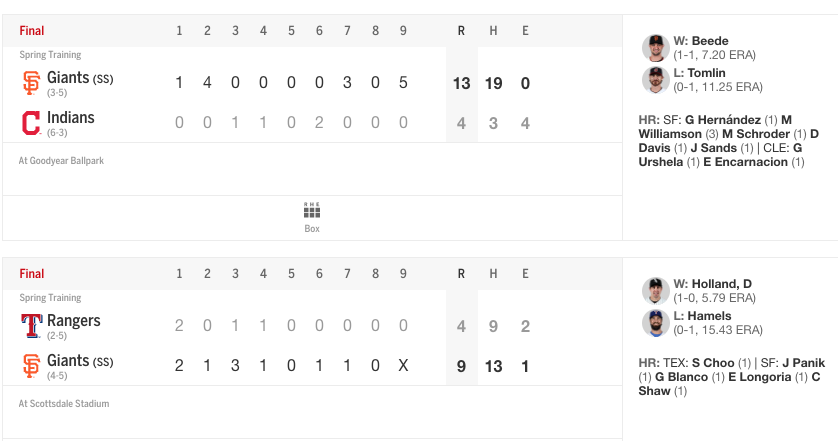 Yesterday I noted that the Giants were leading the majors in most offensive categories in spring training games so far. After yesterday’s split-squad onslaughts, they’re now leading the majors in batting average, runs, slugging percentage, OPS, and home runs. Yes, home runs. They’ve now hit 23 home runs in the Cactus League, and the team with the next most is Cleveland with 19.

What does this all mean on March 4? Well, nothing, of course. But there’s room for a little glimmer of optimism. Yes, it’s “just spring training”–but it also is for all the other teams. Yes, “Arizona air”–but all the other Cactus League teams play there, too.

Maybe more intriguing: The Giants overhauled their coaching staff after last season, and there are now new voices speaking to the hitters, after eight years of Hensley Meulens. What if that makes a difference, somehow?  If some LA hitting guru can keep Mac Williamson from being a bust at 27, why not the new Giants hitting coaches, resuscitating baseball’s worst offense?

We can hope, anyway.

Some reasons for optimism

In yesterday’s post, I used the word “schmoe” a lot, both to describe the guys hitting homers and the guys making errors or blowing late leads. In yesterday’s games, there was some great schmoe action, too–I don’t even know who “Eury Perez” is, and he went 4 for 4 yesterday off the bench in Goodyear vs. the Indians. Dylan Davis, most notable for hitting 26 HRs in 2016 across two A-ball leagues, hit a home run. Career minor leaguer Myles Schroder did, too. But so did Joe Panik, batting leadoff in the home game, Evan Longoria, in his first game at 3B for the Giants, Gregor Blanco, and Gorkys Hernandez (surpassing his HR total of the entire 2017 season). Oh, and Mac Williamson, who went 3 for 4 with a HR and a stolen base.

Chris Shaw hit his first of the spring, to left-center, and doesn’t he just look like a hitter?  https://www.mlb.com/giants/video/shaws-solo-home-run/c-1880573583

It was good to see some regulars–the guys who will actually be on the field on March 29 at Dodger Stadium–playing and hitting. Austin Jackson had two hits in his second start as a Giant. Longoria had two hits and scored three runs. Panik is looking awfully comfortable in that leadoff spot (and Duggar, who came off the bench to replace him mid-game, also went 2 for 2). In contrast, Pence, coming back from his flu, went 0 for 3 with two strikeouts and is hitting .167 so far this spring.

Tyler Beede’s second Cactus League start went much better than his first one. He went three innings, giving up one hit (a solo homer) with one walk and two strikeouts. Considering how well Blach and Stratton have pitched, Beede is likely not competing for a roster spot out of camp, but hopefully he’s setting off on the right path for 2018. He’s had an interesting career. After being drafted in 2014 and pitching briefly in summer short-season leagues, he went to San Jose in 2015 and was excellent, earning a quick promotion to AA Richmond, where he struggled. But then in 2016 he had a great year for Richmond, earning the Eastern League ERA title in 150 innings. In 2017, he struggled at AAA, was showing some signs of figuring it out, and then was injured in July, missing the rest of the season. He returned for five starts in the Arizona Fall League, struggled in the first two and then was solid in the final three.

You see the pattern. His initial outings at a new level are a struggle but then he seems to settle in. So if that holds true, he should be great at AAA this year, ready for a big league call-up when the time comes.

Also, this T-shirt is definitely on the short list for my swag shopping at Scottsdale Stadium next weekend.

Check out this sweet tee @tylerbeede is rockin. It's available at our Scottsdale Stadium Dugout Stores. #SFGiants pic.twitter.com/QY0wgCx1Mq

Folks around the Giants (beat writers, Marty Lurie, the Giants’ announcers) seem to think that Holland is seriously in the mix for perhaps a long reliever spot, especially with Will Smith missing at least the first month of the season. Holland’s inital raw numbers (ERA 5.79, WHIP over 2) are not impressive, but eight strikeouts in 4.2 innings (second only to Bumgarner) are. Josh Osich is so far making a strong push for a lefty spot in the bullpen, and he’s on the 40-man, so this is an interesting competition to watch.

The big question for the next few weeks

I know it’s way too early to speculate much, but what else do we have to do?  Monitoring yesterday’s games and seeing how well guys like Mac, Shaw, and Duggar are doing this spring, it makes you wonder: Don’t they have to get some of these younger guys on the roster somehow?

What does a team trying to bounce back from 98 losses do: Double down on the veterans-only approach, or take a risk or two by mixing in a younger, hungrier player? What might that look like?  Well, Duggar could make the team, pushing Jackson to the fourth outfielder spot. And Shaw or Mac could make the team. If it’s Shaw, he should platoon with Pence, meaning that Shaw would get more of the reps, being a lefty hitter. All of that would mean no room for Blanco, Gorkys, Parker, or Slater.

There is definitely a glut at the outfielder spots right now. You have the old (Pence, Jackson, McCutchen, Blanco), the not-that-young (Gorkys, Parker, Mac), and the young (Slater, Shaw, Duggar).

The smart money is on the “old.”  This is the Giants we’re talking about, right?

And here’s the lineup. Look who gets to play with the big kids today–young Mr. Duggar (Panik leading off again, though).

Enjoy the first Giants telecast of the spring–and the Oscars (go Jimmy Kimmel and any movie but “The Shape of Water”!). Lefty out.