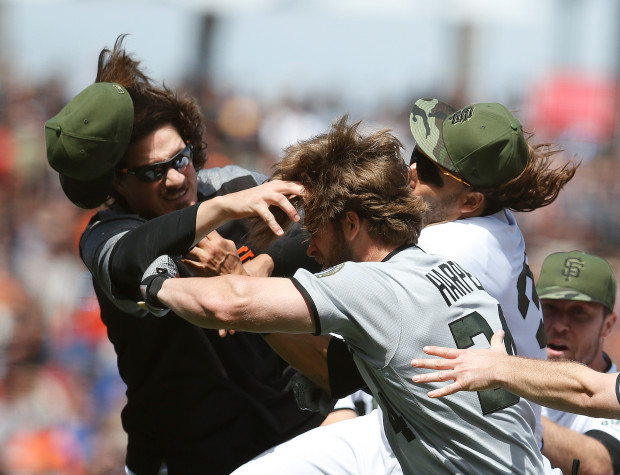 It’s not often that I do these previews, type in the two teams’ records, and see that the opponent has a worse record than our Giants. Thanks to last night’s slopfest–uh, slugfest–the Giants have dropped to third place in the reverse pennant race. At least for now. Speaking of futility, last night the Bay Area Sports Guy tweeted that the Dodgers are 3-14 since SI put them on the cover as “The Best Team Ever?” Some Dodger fan took umbrage at what are, after all, just the facts, reminding BASG that the Giants are in last place. But I liked this reply from a Giants fan named Ryan (‘scuse the foul language, those of you who care about that).

But we may have met our match this weekend. These White Sox may be worse than the Phillies, no matter what the standings say. The fact that there was a discussion over whether or not Buster Posey stole home pretty much tells you everything you need to know.

So tonight we have the Shark (seen at the top of this post about to rip Bryce Harper’s face off), who’s arguably been the best pitcher and certainly the most interesting guy to watch this year. It would be nice to see him get to the 200 innings/200 strikeouts milestones and whittle that ERA closer to 4. Heck, he might even get a win tonight, as James Shields brings back happy 2014 World Series memories.  Here are the lineups.

Bring it home, Surf Maui. Our hearts are in Florida with Greek Giant and his parents and our other friends, but we’re glad you’re repping us in Chicago. See you all in the morning with a wrap-up.