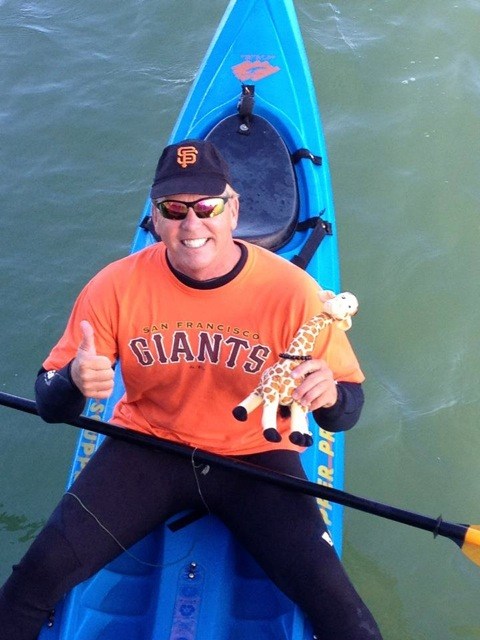 So what can we say about this game today, this series, and this season?  Yesterday’s game was typical:  a starting pitcher is OK, not great, not terrible–and it’s not enough. The offense musters a few scoring opportunities–and the run-producing part of the order can’t cash them in.  The opposing pitcher looks like the sure Cy Young winner for his league.  Yep. Check, check, check. If you really want to look at the box score, here it is.

Oh, there was a splash hit.  Those are kind of fun. With this one, Brandon Belt ties Pablo Sandoval for #2 on the all-time list with 7 (only 28 behind Bonds!).  The photo above is of the iconic McCovey Cove Dave, who retrieved Belt’s ball yesterday.

And Jeff Samardzija deserves some credit for what he’s accomplishing. Yes, the two long balls killed him, but his strikeout-walk ratio since the beginning of May is epic and getting national writers’ attention now. (Peter Gammons of ESPN had a feature on him yesterday, but I can’t link it due to the paywall.) Yesterday’s start was another one: 6 strikeouts to only 1 walk, and a WHIP of under 1 (4 H, 1 BB) in his 6 innings.

I was texting with Greek Giant this morning about blog business and he asked me:

What are we going to do about the Giants?

I said, only half-jokingly:

They should let TWG run the team.

So: as a thought experiment, I’m letting you all run the team.  Give us your best shot. Pick ONE (1) thing you would do, either immediately, at the trade deadline, or before next season, to “fix” the Giants. I’ll set a low bar for “fix,” too–you don’t have to get them to the 2018 World Series, but you have to at least get them competitive and interesting, not boring, flat, and frustrating to watch.  Pick the most important thing, not low-hanging fruit like “DFA Gorkys Hernandez” or “Don’t pick up Matt Cain’s 2018 option.”  Those things are very likely happening anyway.

If you’re looking for ideas (or a reality check), here’s some food for thought from Jerry Crasnik of ESPN.com. It’s kind of depressing, though.