I Hate The Dodgers 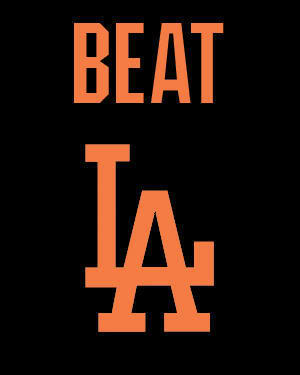 I’ve hated them since I was a 10-year-old new Giants fan watching Mays, McCovey, Marichal, Perry, and (Bobby) Bonds. I loved Bill Laskey because he famously said, as a young Giants pitcher:  “I hate the Dodgers!  Hate’ em!  Hate ’em!”  I hated them in the 80s when we’d go to Dodger Stadium to see the Giants while we were grad students at USC.  I hated them in 2013 when former Giants hero Brian Wilson made an a** of himself yelling at Larry Baer in front of 41,000 people at the end of a nice Giants win (I was in the park for that one–it was beyond strange).

I’m too young to remember ’62, and I wasn’t born for Bobby Thomson’s heroics in ’51.  But some of my favorite memories are of Joe Morgan knocking the Dodgers out of the playoffs on the last day of the 1982 season, MadBum taking Kershaw deep twice, and, of course, Brian Johnson in 1997.  Even when we’re not playing them, I hate them and root against them and rejoice when they fail.

I don’t care that they have appealing young players or that Kershaw’s the best pitcher of his generation or that Jansen’s putting up historic numbers or that Dave Roberts was a good Giant who started a winery with Rich Aurilia. I. Can’t. Stand. Them.

I was born and bred to hate the Dodgers. I don’t know any other way.

Here are the lineups. Belt still out. Starts for MyGuy™ Gomez and Kelby; Hwang playing 1B (hope it goes better than the last time).

[We’re off to see James Taylor and Bonnie Raitt at AT & T tonight, so I’ll be back with a postgame wrap in the morning.]