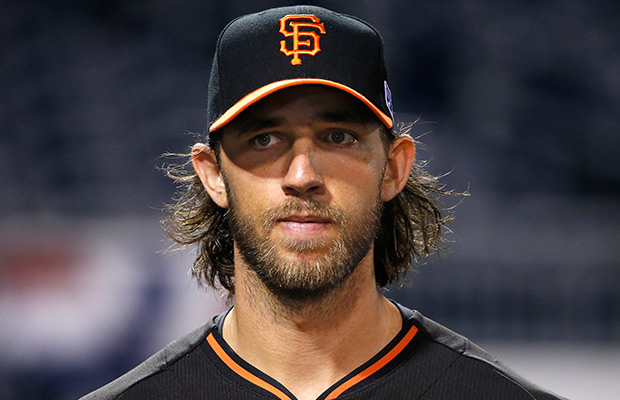 Well, at least Great Giants Fans Crawnik and his Mrs. get a good pitching matchup tonight. This, of course, was the matchup in Arizona on Opening Day, April 2, when the Giants, fresh off a playoff season (albeit abruptly ended) and a winning Cactus League season, had our hopes high. That shaky bullpen from last year?  No problem. Yeah, bummer about Will Smith, but at least we have our shiny new closer and last year’s bullpen hero, Derek Law.

It started off so great, too, with Bum taking Greinke deep for the second time in his career and then later taking reliever Chafin deep, the first starting pitcher ever to hit two home runs on Opening Day. Even though Bum, after taking a perfect game into the sixth, gave up three, he had 11 strikeouts against zero walks. He left after seven innings with a 4-3 lead…and then it all fell apart. Law blew a save. The Giants re-took the lead in the top of the ninth on a sac fly by the 2016 postseason hero, Conor Gillaspie. And then Melancon gave up two, blowing his first save and taking the loss.

We had no idea on April 2 how we’d look back on all that as the harbinger of everything bad to come. Melancon’s 2017 season a wounded bust. Law, demoted to the minors by June and passed up as the promising face of the future by the younger Kyle Crick. Gillaspie, DFA’d by August. Bum, the iron man, making only his 16th start on September 16.  Meanwhile, the Diamondbacks, one of the game’s biggest disappointments in 2016, are one of the best teams in baseball in 2017.

It’s good, most of the time, that we can’t foresee the future.

Anyway: it’s still a Bumgarner-Greinke matchup, and as this wretched season winds down, there’s not too much else to look forward to.  Bum needs a bounce-back start. I suspect he’ll give us one. His credentials as a mentally strong SOB are unquestionable.

Here are the lineups. This is good–Jones at 3B, where he should be. (Don’t carp about Sandoval playing first. Buster catches Bum, and that’s just how it is.) Parker and Mac in the corners.  Hopefully poor ol’ Pence can get some treatment on his aching back, wrist, and hammy. Not a reason in the world to push him to play through it right now.

I’ll mostly be watching the USC game, which kicks at 5:30, but I’ll check in on the Giants, and I’ll be back in the morning.