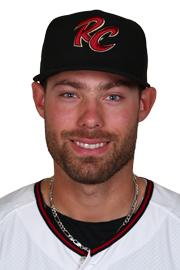 To my surprise, it was Mac Williamson, not Jarrett Parker, who was called up to take Austin Slater’s spot after Slater’s unfortunate injury last night. Mac’s a lucky guy. Not only are his fading career prospects getting another unexpected chance, but he gets to avoid playing a doubleheader in Sacramento (104 degrees at game time).

The first game in Sacramento is a suspended game from April 7, which was supposed to be Opening Night for the River Cats but was rained out.  As a result, the box score is a mind-bending time shift (see below).

Check it out: Tomlinson, Hwang, and Slater are with the Giants. Arroyo is injured and out for awhile. Ruggiano, Calixte, and Federowicz, like Arroyo, have come and gone with the Giants already this season. Kyle Blanks is no longer with the organization. And Chris Stratton, who threw 106 pitches in Detroit barely 48 hours ago, is most assuredly not the starting pitcher.  But that’s how things were on April 7, so…

Last year MadBum had a bobblehead night to commemorate his winning the Silver Slugger award, and he was the starting pitcher. Tonight, with Samardzija on the bump, it’s “Shark Snow Globe Giveaway Night,” which, I’m not gonna lie, seems just a tad random to me. But these days, a Shark start is one of the few things to look forward to, so hopefully he has a great night and doesn’t get shaken up by the potent Marlins lineup (“shaken up” like a snow globe, get it?).

Barry’s Finally on the Wall of Fame

Right now we’re in our hotel room about a 10-minute walk from AT & T, between seeing Spider-Man on the IMAX at the Metreon and going off for our evening plans.  Mr. L is streaming the Wall of Fame ceremony for Barry Bonds, going on right now. Although we could have gone, we decided not to fight the crowds. But congrats to Barry; it’s obviously deserved and long overdue. We went to the Jeff Kent Wall ceremony in 2009, and it was pretty fun. A lot more of those to come, as so many recent Giants are eligible (5 years + All-Star or 9 years as a Giant). So in the years ahead, we should have Lincecum, Cain, Bumgarner, Posey, Sandoval, Wilson, Romo, Pence, Crawford, and Belt. Did I forget anyone?  Yes, Vogelsong!

It’s nice to remember the good moments, and I hope there are more tonight. You couldn’t ask for more beautiful July weather here in San Francisco.  Here are the lineups, and I’ll be back tomorrow morning with a wrap-up.