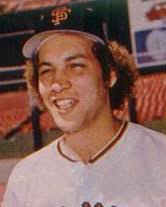 If you happen to be at SM’s house to visit the SMGMAMC®, the password for one of my WiFi networks is Montefusco! (Don’t get excited; that’s not my password for anything else or for my other WiFi networks.) The Count was one of SM’s favorite players (obviously). He was a truly unique player, a great Giant and has led, shall we say, as you will see below, an interesting life. So, in case you hadn’t yet guessed, today’s post will discuss the aforesaid Count, and show you some Montefusco memorabilia. If you read all the way to the end, I’ll show you a truly unique, one-of-a-kind piece, and tell you how SM acquired it.

As most of you know, before Jonathan Sanchez pitched his no-hitter on July 10, 2009, it had been almost 33 years since the last Giants pitcher to do so was John Montefusco in a 9-0 victory over the Braves on September 29, 1976. During that more than 30-year span, he was quoted as saying that any time a Giants pitcher was flirting with a no-hitter, the press was on the phone with him asking for a comment–including that night. Here’s a link to an article about this.

In 1976, Montefusco was named to the All-Star team. But as discussed below, that was not the Count’s only honor.

The Count was legendary. In his first game as a Giant, as a September call-up in 1974, Montefusco pitched 9 innings of scoreless relief, getting the win, and like Will Clark, also hit a home run in his first big league at-bat. He is one of the few pitchers to ever do so.

In 1975, prior to a game against the Dodgers on July 4th, Montefusco, like Joe Namath in the 1969 Super Bowl, famously guaranteed a win, and then proceeded to ensure it by pitching a 1-0 shutout. He was named Rookie of the Year in 1975, becoming only one of two players ever to hit a home run in his first at-bat and win a Rookie of the Year. SM defies anyone to name the other without looking it up (as I did). In that Rookie of the Year season, The Count led the National League in strikeouts per nine innings.

Here is a story and some photos of the Count’s return to San Francisco at a 1978 team reunion.

John “The Count” Montefusco of the San Francisco Giants stands on the dugout steps waiting for a pre-game ceremony before the game against the Los Angeles Dodgers at AT&T Park on Sunday, April 8, 2018 in San Francisco, California. (Photo by Brad Mangin)

After six-plus seasons with the Giants, he was traded to the Braves for Doyle Alexander. The Count went on to sign with the Padres, where he was a teammate of future Giants manager Bruce Bochy.

Here is a 1976 Montefusco baseball card and a signed photo of the Count.

Montefusco ended his career–at least as a baseball player–with the Yankees in 1986. However, unfortunately he continued to make headlines. In 1997, he was charged with beating his former wife. Unable to make bail, he was in jail for two years, before he was acquitted of the aggravated assault, making terroristic threats, assault, burglary and criminal mischief charges. He was found guilty of trespass and simple assault and placed on probation. Here is a story about it.

It is not a pleasant story, and it is presented to provide a full picture of the Count on which SM would rather not focus–though impossible to overlook. Indeed the incident, and Montefusco’s financial woes and bankruptcy, may have played a role in SM unwittingly obtaining the memorabilia discussed below.

So here is the item at issue and the story behind its acquisition by SM. In addition to being named an All Star in 1976 Montefusco was also named by the San Francisco Baseball Writers as the Giants team MVP. Here is a photo of the trophy that he was given, which as promised is the only one in the world:

SM was writing a book about the risks and benefits of the use of structured annuities to protect the recipients of large personal injury recoveries from blowing their money and becoming unable to afford their needed care.

In the course of my research, I was considering the analogue of lottery winners or professional athletes, each of whom receive large sums, and a very high percentage of whom are broke within a few years. Based on an article in Sports Illustrated eventually cited in footnote 11 of my book, I discovered that within two years of retirement, 78% of NFL players have gone bankrupt or are under financial stress, and 60% of NBA players were broke within five years. The article (Pablo S. Torre, “How (and Why) Athletes Go Broke,” Sports Illustrated, Mar. 23, 2009, p. 90) went on to report that “four hundred professional title rings were pawned to an online reseller in three months.”

Naturally, SM had to go to the website to find out what these rings cost, only to discover that they were way too pricey for the as-yet created SM Museum. However, there was this one item–the John Montefusco 1976 Giants Team MVP Award, that was very reasonably priced–and SM just had to have this one-of-a-kind collector’s item.  To be clear, SM did not know about the domestic violence claim or the Count’s financial woes when he acquired this piece for the nascent SMMAMC®. I was told that Montefusco had donated it to a charity auction, but in retrospect, I have my doubts about that.

In any event, I have reached out several times to the Giants in order to try to return this trophy to its rightful owner–the guy who won it, John “The Count” Montefusco. Unfortunately the Giants never got back to me, and after several attempts I gave up. So if anyone has a way to contact the Count, I am happy to give it back to him for free.

By the way, for those of you still in quarantine, SM is pretty sure that you can still purchase my book on structured settlements from the New York State Bar Association. They must still have warehouses full of unsold copies of them.

That’s it for this installment of the tour of SMMAMC®. See you next time with some other memorabilia. I can promise you this, one of these days SM will show you his most prized profession– a very, very special unique item from the 2014 World Series team. A few of you know what it is, and if so please don’t tell. But for those who don’t, I promise that it is special, and I am saving it until the announcement that baseball will return.

From the SM Bunker– out!