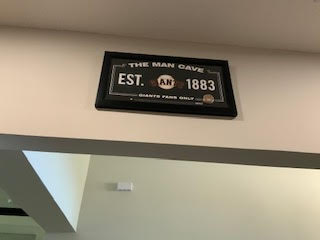 In order to kill the time (mine writing and your reading) SM is starting a series to describe some of the items in the Surf Maui Giants Museum and Shrine. Today I will start with my Candlestick/Polo Grounds items.

When they tore down Candlestick Park, I’m sure that many of you, SM included, purchased seats. Here is a picture of mine located in my Surf Maui ManCave ® (photo above). If you look closely, you can see some crossed out foul language.

However, in addition to Candlestick seats, in order to enter the ManCave, one must enter through a Candlestick Park turnstile– in this case Number 22. It has a real working counter, currently at 45,715. When I moved to Florida, I had been hoping to use the counter to keep count of the women coming in and out, but fortunately I met Vailsunshine, so the number has not changed. However after being cooped up with me for the last week or so, I can see her eyeing the knives, and I have hired a food taster, just in case.

One of the most rare and interesting pieces of ballpark memorabilia is the following. See if you can tell what it is.

The way I found this seat side (as well as another item that I will discuss another day) may also be of interest. I certainly wasn’t looking for it. Actually, I was writing a legal article on the use of structured settlements (annuities essentially, but with significant differences) in personal injury litigation to preserve the plaintiff’s recovery and assure that their money would not run out.

In the course of my research, I ran across articles about how a very high percentage of lottery winners blew their money and were bankrupt in a few years. The same was true about professional athletes, and many had to sell their championship rings. This led me to a site where they were selling rings and other stuff, including old stadium seats from demolished stadiums. I had no room for a Polo Ground seat– and all of them were green anyway, but I had to have–and therefore bought– the Giants seat side that you see here.