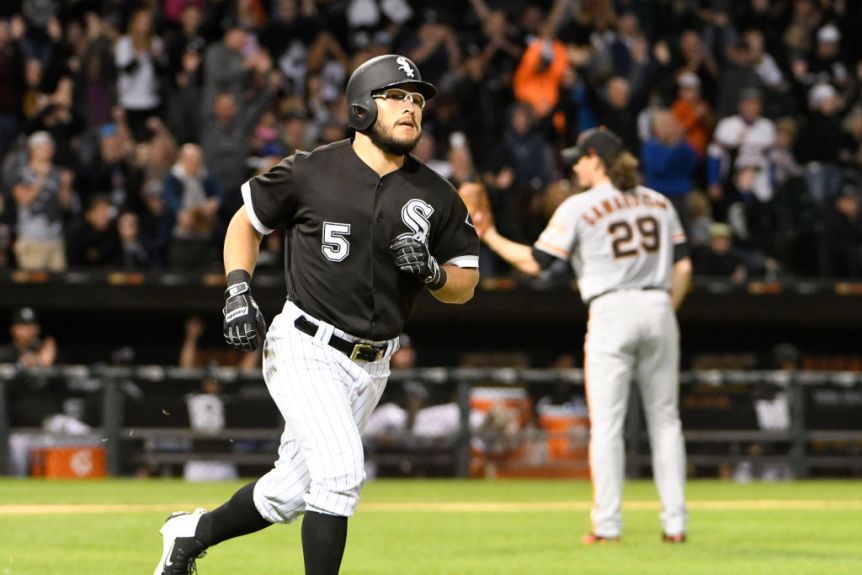 So I was reading through the comments from last night’s game and saw this exchange.

I don’t deserve the kudos in this case. I didn’t see one pitch of last night’s game. We drove to Marin for a family dinner-and-movie night at my mom’s house (my siblings and our daughter, Lefty Jr., came too). We heard the first couple of innings and got there when the score was 2-0. Mostly Mr. Lefty and I were concerned about missing the Stanford-USC football game, but we recorded that and watched it later, and I followed the score on my phone during the movie (The Sting; what a fun movie).

Anyway–hoo boy. In the race for the bottom, wow, was that a statement game for the Giants. Where do I start?  The six home runs allowed, tying a franchise record? (The last time that happened was May, 2010, and the game was started by Todd Wellemeyer. That’s the part of the 2010 season best remembered as “the part before they called up Posey and Bumgarner.”) Jose Abreu hitting for the cycle? (That flashed on my phone as a notification during the movie. Woo hoo.) Or how about the “offense” mustering up three measly hits against a washed-up pitcher who’s been bad for the last three years, especially lately? (An infield hit for Posey[!], a pinch hit for Calixte, and Nick Hundley’s solo HR that kept the Giants from being completely skunked.) Or the “Little League home run” (triple and an error)?

So…Osich got zero outs and gave up four runs?  I’m…sorry I missed that. (#notsorry) As for Roberto Gomez, remember a week ago when you’d never heard of him? (I had, but only because we have partial season tickets for the Sacramento River Cats. I saw him pitch quite a bit this year, and I can honestly say it never occurred to me he was in line for a call-up.) Now you know why. Another one of those “Huh?” decisions the Giants have made this year.  Back to Osich, though. Back in June, one of the blog writers here, I forget who, wrote this gem as part of a postgame wrap (as a “bright spot” after a disheartening loss):

Lost in all the misery is that Osich is quietly having a nice bounce-back season and is the top-dog lefty reliever again over Steven Okert (now in AAA).  The numbers are good; the eye test is good; the stuff has always been good. If he can right his ship, that’s good news for the Giants’ bullpen next year.

Hahahahahahaha. Wrong, wrong, WRONG. Osich is a mess, he’s lost, he’s out of options after this season, and it’s time for him to go. (IMHO, it’s worth keeping Okert around for at least one more year. He’s three years younger and had a nice year in AAA. But he should be an extra, not the lefty they rely on.)

The Cleveland Indians and Rash Promises

They’ve now won 17 games in a row. A couple of days ago I read that a Cleveland business that installs doors, windows, and siding had randomly, back in August, promised customers a full rebate on purchases if the Indians won 15 games in a row. Now they’re on the hook for $1.7 million in rebates. We just thought that was so odd–why would you think to pick out exactly that achievement? We started speculating about the local oneupmanship that could be going on:  “If the Indians win 16 in a row, free cars for everyone in the greater Cleveland area!”  “Seventeen in a row–student loans forgiven!” “Eighteen in a row–free medical care for life!” And from the state of Ohio: “Twenty in a row, and your 2017 property tax is cancelled!”

On the day after Dodgers Manager Dave Roberts said he believed it was “ridiculous” that Dodgers fans had booed Pedro Baez, the manager said the embattled reliever would retain a prominent place in the Dodgers bullpen.

“I can assure you he is going to pitch big innings for us, from now until the end of the season,” Roberts said.

Gosh, that all sounds…vaguely familiar, circa around this time last year, and substitute the names “Santiago Casilla” and “Bruce Bochy.” Anyway, the Dodgers are sailing towards the division title (they’ve knocked two games off their magic number just by seeing the Diamondbacks lose twice to the Padres this weekend), but there are a couple of causes for concern. One is that they actually could cough up postseason home field advantage, especially with a showdown series with the Nats coming up next weekend. The other is that the starting pitchers, who are not exactly known for their durability and innings-eating capabilities, seem to be hitting a September wall. There’s some nervousness and some whining among the Dodger faithful, if you go read the LA Times comment boards. Just heartbreaking after all they’ve suffered.

(Speaking of the LA Times, how ’bout those Trojans and a statement win vs. a Stanford team that’s given them fits over the last decade? Nice bounce-back game for Sam Darnold, but the real story is the dynamic backfield of Ronald Jones II and five-star true freshman Stephen Carr. The Trojans still have work to do on run defense and special teams, but right now it looks like they can outslug opponents with that high-powered offense.)

OK, enough of this for now. Let’s let Giants fan Ryan from Twitter take us out.  I posted this in the pregame piece, and it turned out to be damn prophetic:

Florida and especially Greek Giant:  You’re in our thoughts and prayers right now.