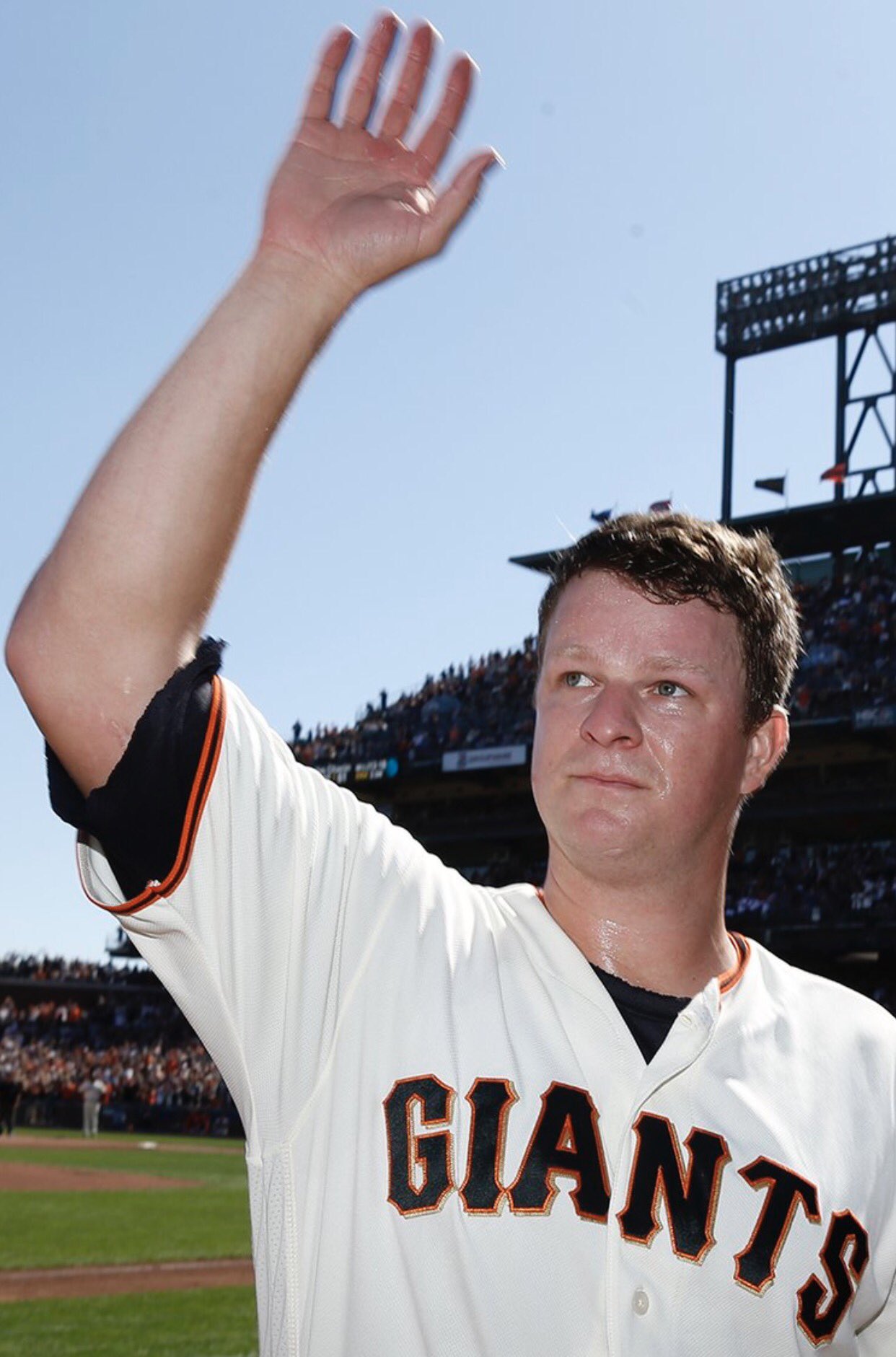 I don’t really want to recap yesterday’s game. As to the details, it was a microcosm of the whole season. The Giants fell short in providing run support to a starter, in playing clean defense at critical moments, and in holding slim leads.  Here’s the box if you really want to look at it.  With their loss, they’ve clinched no worse than the #2 pick in next year’s draft (hey–Will Clark!), and they “control their own destiny”–lose today, and they’re “#1.”

As to Cain himself, there were no disappointments yesterday. Five scoreless two-hit innings from a guy who hadn’t pitched in 29 days. It was gritty, it was amazing, and it was quintessentially Matt Cain. We all saw the various tear-inducing moments, but here they are in the post for posterity.

Madison Bumgarner was waiting for Matt Cain at the end of the dugout: pic.twitter.com/W3EN77zSPx

It's your team now, Bum. Take good care of it. pic.twitter.com/1foFamnbPm

And Amy G’s interview in the clubhouse with Cain after he left the game.

And Cain’s own words:

If Matt Cain didn’t make you feel feelings today, you may need to update your software or reboot your system 😭😭😭 pic.twitter.com/pz71PkZTnW

Eff the game. It was a beautiful, beautiful thing, even down to Ted Barrett being behind home plate, just as he was on June 13, 2012, Cain’s greatest day ever.

The Season from Hell

This has been a rough, rough season to follow. The irony for me is that because of this blog and my weekly commitments to it, I forced myself to follow more closely than I might have otherwise. I’ve been a Giants fan since 1970, so I’m pretty tough. It took exactly 40 years of fandom before I saw my team win it all–from a 10-year-old girl to a fifty-year-old college professor and mother of two–and there were some baaaaaaaad years in there.

This one is arguably the worst ever because those other teams were expected to be bad. Dieter Kurtenbach, Merc columnist, breaks it down pretty well in this piece. People who argue that this season was normal regression and inevitable and that fans shouldn’t be disappointed/angry are willfully ignoring that this was a playoff team last year, less than 12 months ago, and that no one–and I mean experts, not just rose-colored-glasses-wearing twitterpated fans–saw this one coming.

There will be time for postmortems and what’s-next pieces over the next few days and weeks, and I may write one myself at some point, but for now, I’ll just leave it with Dieter’s words:

The Giants’ 2017 season stank — it stank something fierce — and I’m not sure how that smell is washed away.

Great While it Lasted

I’ve been surprised by how sad I’ve felt this weekend. I don’t feel sad for Matt Cain in particular. He’s 33 years old, he has all the money he’ll ever need, he has three World Series rings, he’s the owner of one of only 24 perfect games in major league history (and the only one by a Giant). He’s had a great career and he can look forward to a great life.  I also thought I’d finished grieving for this lost year months ago, maybe after Madison Bumgarner went down with that dirt bike. But I realized that the end of this season and of Cain’s career also represents the end of an era, the most amazing one Giants fans could ever have imagined. When Cain debuted as a 20-year-old rookie in August 2005, the Giants were a bad team in the first of four losing seasons. Then–well, we all know what happened. Now it’s 2017, the final curtain has fallen for Cain’s baseball career, and here we are–hoping that it’s 1996 (a bad team but with a division-winner just ahead) and not 2005 (heading into four bad years, at minimum). I don’t pretend to know where this franchise is headed, and anyone who says they do know is to be looked upon with skepticism. But I loved the era that has ended, and Cain’s departure, more than anyone else’s so far, has made the ending real for me.  I guess if you feel sad about the end of an era, at least you can be grateful you had the era at all, right?

One more game and then it’s the postseason and the offseason. Lefty out.