Happy Anniversary! –And a Little Gift for My Beloved TWGers 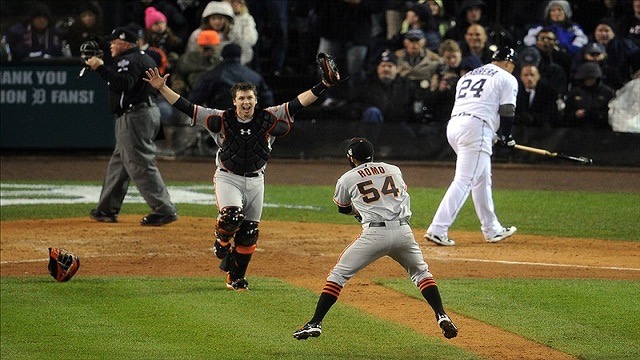 Today begins a sacred week for all San Francisco Giants fans, a series of High Holy Days or Holy Days of Obligation, if you will, depending upon your religious tradition. This is the week in which, forevermore, we get to remember and celebrate three fabulous championships in 2010, 2012, and 2014.

Before we get to today’s anniversary game, we have to set the 2012 scene a bit. The Giants won 94 games and easily won the NL West that year, but they got off to a rough start in the NLDS, losing both home games and down 0-2, headed to Cincinnati to play the final three games–and the Reds hadn’t lost three in a row at home all year. As Ulysses Everett McGill said in “O Brother, Where Art Thou?”–“Damn! We’re in a tight spot!”  And as Ashkon, who wrote music video anthems for the 2010 and 2012 championships put it:

Headed out on the road

After all we had been through

We were finally there

And all they kept talking about was this damn pitcher

But the heart of a Giant

Can never be torn

And a Panda ate Tigers for dinner

We swept, and proved everyone wrong…

Today is the first anniversary of the three. Five years ago today, October 28, 2012, the Giants completed a four-game World Series sweep on a chilly night in Detroit. The Giants were up 3-0 after Pablo Sandoval’s memorable three-homer night in Game 1 and then two taut 2-0 shutouts in Games 2 and 3, courtesy of Madison Bumgarner and Ryan Vogelsong.

Up for Game 4 was Matt Cain, the ace of the staff, who started every final game of all three playoff series that year. He didn’t start until Game 4 of the World Series because he’d gone in Game 7 of the NLCS, and with the quick turnaround between those series, Game 4 was the earliest he could go. (This was supposed to be a huge disadvantage for the underdog Giants: The favored Tigers had their rotation all rested and lined up. The Giants had to start Barry Zito in Game 1 against “that damn pitcher” Justin Verlander, a postseason stud who was considered the best pitcher in the game at the time.)  Cain was facing Max Scherzer, who was good that year but not yet MAX SCHERZER, multiple Cy Young Award winner.

The scoring started with an RBI triple by Belt in the second inning, putting the Giants up 1-0. That didn’t last long, as Miguel Cabrera, the Triple Crown winner and AL MVP that year, hit an opposite-field (and wind-blown) two-run homer to put the Tigers up 2-1. On to the sixth inning, and up came Buster Posey (oh yeah–we also had an MVP!), who hit a two-run homer down the left field line, to put the Giants back up 3-2. Cain gave up a solo HR to Delmon Young in the bottom of that inning, so it was tied 3-3.  And so it stayed, as Cain was relieved after seven innings, first by Jeremy Affeldt, then Santiago Casilla (who broke poor Omar Infante’s hand with a pitch in the bottom of the ninth).

In the top of the tenth, unlikely DH Ryan Theriot led off with a single off lefty reliever Phil Coke. Then Brandon Crawford got a sacrifice bunt down. With two outs, the Giants’ most reliable postseason hero, Marco Scutaro, dumped a single into center field. Theriot raced home with the go-ahead run, crossing the plate with a rebel yell that could be heard back in San Francisco (OK, at least up to the radio booth, which captured it).

Bottom of the tenth, and on came Sergio Romo, who went nine up and nine down to earn three saves in the four-game World Series. I had someone in my office the other day, a long-time Giants fan, who was admiring my World Series wall. He said the pitch that Romo threw to Miguel Cabrera to strike him out looking and end the World Series was the greatest pitch in baseball history. I don’t know about that, but it was pretty darn ballsy and brilliant and amazing, and you can hear Romo screaming with joy after the umpire rang up Cabrera.

I loved that team. I loved that game. I watched that last pitch over and over during the long, cold winter with no baseball. I will love Sergio Romo forever because of that pitch.

Here’s the complete game video and the box score.

I actually started working on this in 2015, when the Giants weren’t in the playoffs but the glow of 2014 was still bright, and the Giants had a surprisingly competitive and entertaining season. In 2016, I was too bummed about the Giants’ early exit from October to keep it up. After this terrible year, I thought we needed something to help us remember. You can’t live in the past, but you can be grateful for it.

So here it is: An Orange October (plus one memorable day in November) anniversary calendar. I’ve filled in each October date that has a memorable Giants postseason game from 2010, 2012, and 2014 (and a bonus date for 2016; despite the sad ending, Gillaspie and Bumgarner deserve a nod for that thrilling Wild Card game). For dates where there was more than one (Oct. 11 had three!), I chose what in my opinion was the most exciting for that date. Each date has a little title plus a link to a video clip representing that game.  I’m not great with document design, and I’m sure some of you artistic types could do better, but here it is anyway, with my love to TWG:

The Astros look confident and the Dodgers look shell-shocked. Such a turnaround from where things were late in Game 2 in LA. Can the momentum shift again? We’ll see tonight.  Despite their regular season numbers, the matchup appears to favor the Astros. Morton (along with Lance McCullers) was the hero of ALCS Game 7, and Wood started the only game the Dodgers lost in the postseason before the World Series and has pitched only once in the last month. Big game with Kershaw back on the mound tomorrow night for Game 5. Feels like a must-win for both teams.

Enjoy your Saturday, happy anniversary, and see you tomorrow (another anniversary!).