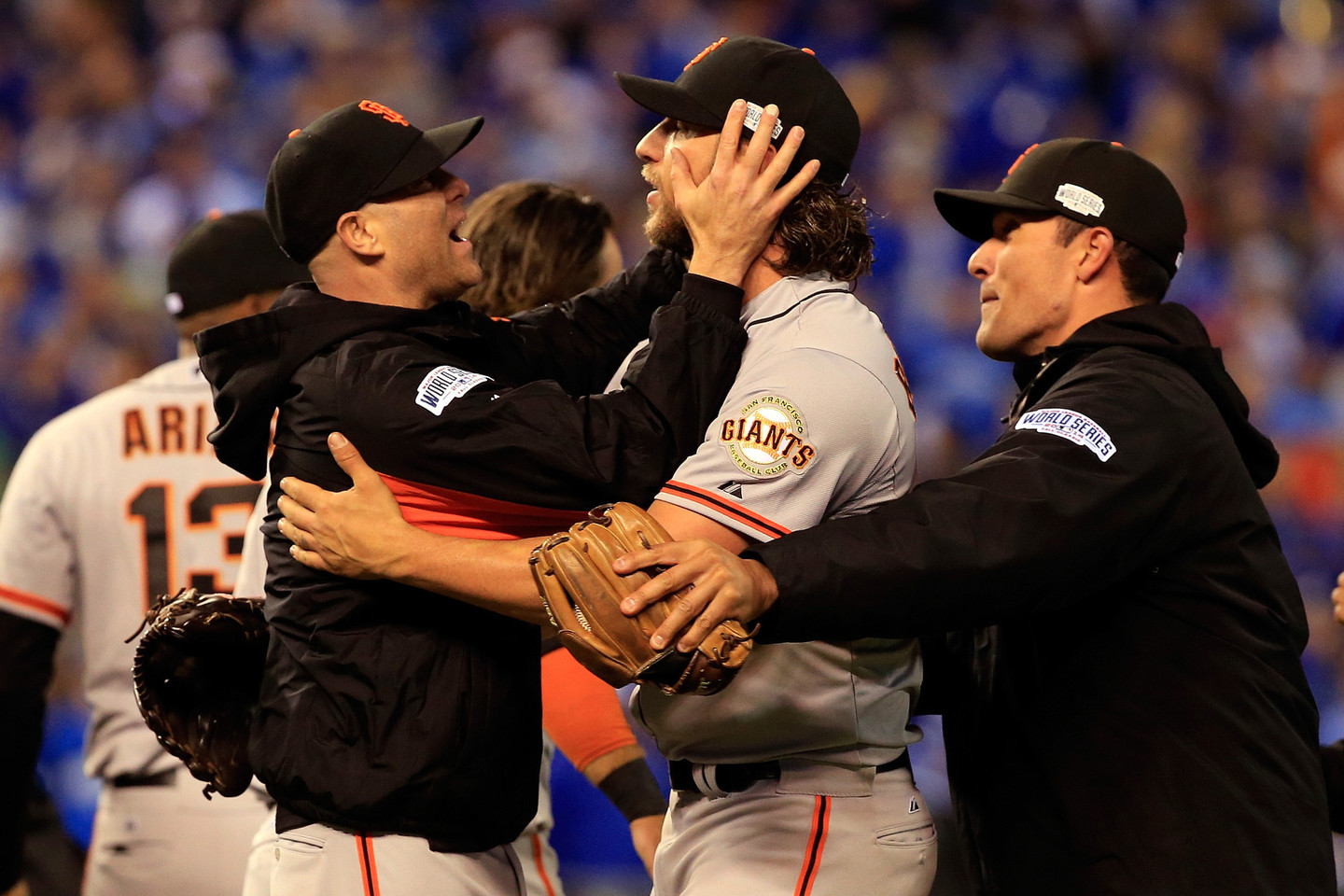 Today is another anniversary in our Giants holiday week. If June 13 has been declared Matt Cain Day in San Francisco because of his 2012 perfect game, then October 29 needs to be Madison Bumgarner Day because, on this date in 2014, he made history and blew all of our minds.

Compared with their agonizing path to the 2012 World Series–winning six elimination games to get there–the Giants had a relatively easy road to the 2014 World Series…once they won the Wild Card game in Pittsburgh, and win it they did, behind Bumgarner’s complete-game shutout and Brandon Crawford’s fourth-inning grand slam that silenced a raucous crowd. They dispatched the heavily favored Nationals in four games and won the pennant over St. Louis in five games, but it wasn’t as easy as it sounds. Just as with the Astros right now, there were some gaps and holes, especially with the pitching staff. A rotation consisting of senior citizens–not counting 25-year-old Bumgarner–and not including 2010 and 2012 heroes Matt Cain (season-ending elbow surgery in July) or Tim Lincecum (out of the rotation since August and barely used in the postseason), a closer who was a little gassed and shaky (Casilla), a former closer who’d been demoted in June of that year and had given up the walk-off homer in the only game the Cardinals won (Romo)…and Hunter Strickland, who set a dubious record by allowing six (6) home runs and at least two temper tantrums that postseason (foreshadowing this year’s desultory Memorial Day brawl with Bryce Harper). By the end of October, Bochy could really count on just three pitchers: Affeldt, Petit–and Bumgarner.

Fortunately for the Giants, the Kansas City Royals’ rotation wasn’t much better, with “Big Game James” Shields not living up to his nickname and people like Jeremy Guthrie making World Series starts. If it wasn’t for two stellar performances by the late Yordano Ventura, there wouldn’t have been a Game 7. On the other hand, without Bumgarner, the Giants wouldn’t have gotten there, either. Bumgarner won Game 1, giving up just a solo home run to Salvador Perez in seven innings. The Giants lost Games 2-3 and rallied to win Game 4, with Yusmeiro Petit getting the win with stellar middle relief. Petit was the X-factor in the postseason, much like Lincecum had been in 2012, with Petit earning a win in each of the three rounds, including his epic six-inning performance in the 18-inning game in Washington. Other than Bumgarner, who made six starts and went 4-1 with a no-decision (and, of course, a save), no one stood out more than Petit. Bumgarner pitched a complete-game shutout in Game 5 in San Francisco, throwing 117 pitches, and the Royals sighed with relief knowing they were done with him.

They sighed too soon.

Jake Peavy got hammered in Game 6 back in Kansas City, and young Ventura pitched brilliantly. In sad irony, Ventura’s compadre and friend, Oscar Tavares of the Cardinals, had died several days earlier in a car accident in the Dominican Republic. Ventura wrote Tavares’s initials and number on his cap for Game 6 and dedicated his efforts to his friend’s memory. Little did anyone know that less than three years later, Ventura himself would die in a car accident in their home country.

So Game 7 was set up, with 39-year-old Tim Hudson set to face Jeremy Guthrie. (It would turn out to be an all-Jeremy decision night.)  After a long and distinguished career, Hudson was finally in the World Series, and he desperately wanted to bring it home for his team, but it was not meant to be. Hudson didn’t make it through the second inning, giving back the two-run lead his offense had provided him. He was replaced, as the plan had been before the game began, by Jeremy Affeldt, who had never entered a game in relief that early but had been told to be ready. Affeldt gritted out 2 1/3 scoreless innings, helped tremendously by one of the best double plays ever and the first replay review in World Series history.

In the top of the fourth inning, the Giants pushed across the go-ahead run following a leadoff infield(!) single by Sandoval, a single by Pence that moved Pablo to second, and alert baserunning (with Pence coaching Pablo from first base) when Pablo took third on Belt’s fly ball. That brought up Michael Morse, one of the heroes of the epic pennant-winning game over the Cardinals, who was DHing that night and had already hit a sacrifice fly earlier. He delivered a broken-bat, opposite-field single, and Pablo scored easily. And though we didn’t know it at that moment, the deed was done, the twins would become triplets, and there would be another parade down Market Street.

The plan before the game was for Affeldt to be the first up from the bullpen if Hudson faltered early. If the Giants took a lead, then Bumgarner would come in. Affeldt pitched the bottom of the fourth, and then in the top of the fifth…there was Bumgarner, warming up in the bullpen. The top of the fifth ended, the bullpen gates opened, and in he came, as the Royals fans booed him and a nervous tension filled the park.

Bum was a little shaky the first inning he pitched, but he picked up steam and just mowed the Royals down, out after out after out. After a leadoff double by the first hitter he faced, he got 14 straight outs. He passed 40 pitches, 50–how long would he go? Would Bochy turn to Romo, Lopez, and Casilla to get the last six outs?

He would not. Bumgarner was the plan. And with two outs in the bottom of the ninth, we knew we were watching history.

And then–the unthinkable. The superb Gregor Blanco, the author of so many stellar defensive plays in a Giants uniform, misplayed a ball to center field, turning Alex Gordon’s single into a triple with “help” from Juan Perez, who was literally in the game for his defense (and had made a great play earlier on a slicing liner down the left field line hit by future teammate Nori Aoki). It was surreal. Would the same guy who had saved Matt Cain’s perfect game with his glove also be known as a 21st-century Fred Merkle, as the guy who denied Bumgarner his place in history and cost the Giants a championship?

Nope. Not a problem. Almost before we had time to process the possibilities, Bumgarner took care of the next and final batter, Salvador Perez–who, by the way, was and is the answer to the trivia question of who is the only hitter to ever drive in a World Series run against Bumgarner (with his homer in Game 1). So there was a little drama, but it didn’t last long. On a 2-2 pitch, Perez popped up to Sandoval, who caught the ball in foul territory and collapsed face-up on the ground with joy and relief. Posey hugged Bumgarner and then sagged with exhaustion.

[Don’t look so sad, Royals. Your day is coming, I promise. Just not on Madison Bumgarner Day.]

Bumgarner calmly accepted the keys to his new Chevy truck (“with technology and stuff”) for winning the World Series MVP award.

We Giants fans have had an embarrassment of riches with three championships in the five-year period between 2010-2014. As special as it is to see your team win a title, it’s even rarer to see history made, and that’s what we saw with Bumgarner. He set the record for the most postseason innings ever. His World Series ERA of 0.25 is the best in history (30 innings or more pitched). His five-inning save in Game 7, especially notable after a 117-pitch complete game just three days earlier, is a record that may never be touched.