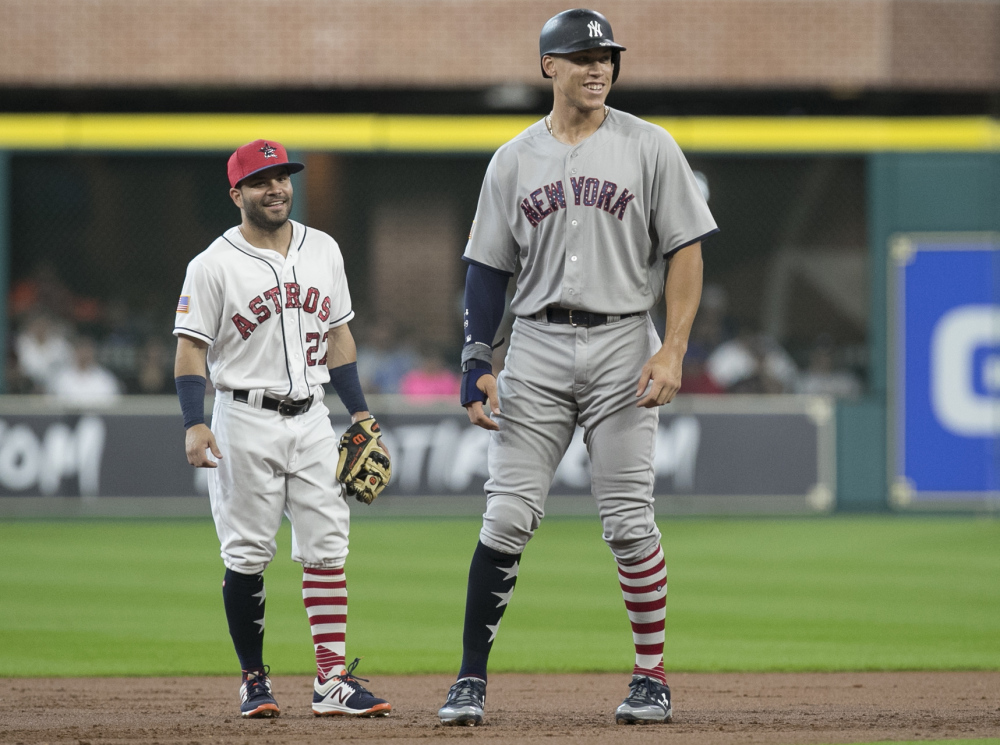 This was awards week for MLB, and for the most part, there were few surprises and little controversy. I’m sure no one had trouble with Bellinger and Judge as Rookies of the Year or Lovullo and Molitor as Managers of the Year. The two Cy Young winners, repeaters Scherzer and Kluber, seemed set since about July or so, especially once Kershaw missed time with another back injury. (Speaking of Kershaw, I was surprised to realize that he hasn’t won a Cy since 2014, despite a stellar track record in the intervening three years. He got “aced out” [pun intended] by a great year for Jake Arrieta in 2015–and his own teammate, Zack Greinke–and then missed time with injuries in 2016 and 2017, losing out to the more durable Scherzer.)

The MVP results in both leagues made up for the lack of drama in the other awards. In the NL, it was hard to peg. In different ways, Stanton and Votto had pretty transcendent years statistically–but neither was on a winning team. Goldschmidt, Arenado, Blackmon, and Rendon were on playoff teams–but no one’s stats especially stood out from another’s, especially compared to the performances of Stanton and Votto, the top two vote-getters.  And Stanton’s 59 home runs this year are in the top 10 all-time. That stands out. I get why Stanton won.

Ken Rosenthal, who had an AL MVP vote but not a NL vote, released his “unofficial” ballot for NL, saying he would have voted for Goldschmidt.  He and Brian Kenny of MLB Network do not seem to like each other, so BK took an opportunity to take a cheap shot:

Ever notice how people always say “All due respect” right before they say something disrespectful?  (I’m #TeamBowtie. I think Rosenthal’s terrific and that Kenny is an arrogant blowhard.)

And then the AL

The AL MVP voting wasn’t as muddled between statistical high-performers on losing teams and the best players on good teams (i.e., Goldschmidt and Arenado): It was obviously between The Big Guy and The Little Guy, and both had great years for excellent teams. Some were shocked that the vote wasn’t closer and speculated that Altuve benefited from his track record (like the Oscars sometimes–“it’s his turn”–though it didn’t work out that way for Goldschmidt, who’s been a finalist three of the last five years and never won) and the fact that Judge would clearly be the Rookie of the Year winner (like Corey Seager last year). There definitely was some whining about “anti-Yankee bias.”

Funny, many #Astros fans were convinced I’d vote for Judge – and surprise, they are conspicuously silent today! https://t.co/oafERsZtyr

How can anyone be anything but happy for Altuve, though?  Scrappy little guy who went through years on a terrible team quietly having what looks like will be a Hall-of-Fame career when it’s all over. There are younger, snazzier guys on the Astros now, your Correas and Springers and Bregmans, and now they even have the celebrity ace in Verlander, but before all that, Altuve was the heart of that team for years.

OK. Maybe I’m a little biased in favor of short guys, being somewhat height-challenged myself. But I love Altuve and I’m happy he won. Did you know that only 11 second basemen in MLB history have won an MVP award–the least represented of any position?  Who can name the two most recent 2B winners?

Where will the NL MVP play next year?

In GG’s previous post, he evoked the 1993 Ghost of Bonds, who was also the defending NL MVP and ended up changing teams. But he was a free agent, and that’s a bit different. It’s extremely unusual for a team to trade the league MVP before the next season. It’s only happened twice in baseball history, and the first time was over 100 years ago (Eddie Collins in 1914, as I’m sure you all remember). The other was Alex Rodriguez being traded from the Rangers to the Yankees in 2003.

Nonetheless, it appears that the one place Giancarlo Stanton will not be playing next year is Miami. What a weird chain of events that includes that tragic boating-under-the-influence death of Jose Fernandez in 2016 along with the sale of the team to new owners who need to drastically reduce payroll. It seems ludicrous that the Marlins would break up that stellar outfield and lineup, but it looks like exactly what they plan to do.

Where will Big G be? We all know that the Giants have already submitted a trade proposal (here’s Rosenthal’s free Athletic article about it), but it’s also clear that the Giants will be just one of several teams making a bid. I could see the Red Sox getting him, maybe even the Yankees. And it goes without saying that if the Dodgers get serious about this, it’s game over.

Call me a cynic, but is it possible the Giants made the bid just so they could say they tried?  (See Pablo Sandoval, 2014.)

Sighhhhh. I love that guy. Always have. It would be so fun if he were a Giant. But I just don’t see it happening.

I suspect this will get resolved, at least as to the Giants’ involvement, sooner rather than later. They have too many holes to fill, too many problems to solve, to keep going after the Big Fish (see what I did there?).

So congrats to all the award winners, and good luck to Stanton, wherever he goes. Unless it’s the Dodgers, in which case he can rot.  Lefty out.