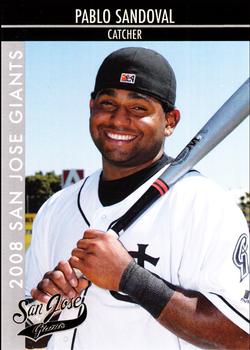 Once upon a time, there was a very bad Giants team. It was so bad that by early August, the only thing the fans could look forward to at all was the starts by their ace every five days.  The only question left by then was where in the top 10 would the Giants pick in the next year’s draft.

Up came a kid from AA, a switch-hitter who’d broken in as a catcher.  And he gave the team a spark, he was fun to watch with his energy and joy in the game, and he hit .345 down the stretch. The next year, he was the Opening Day third baseman, and the team went from pitiful to 88 wins and would have made the playoffs if there had been two wild card spots then. The year after that, they won the World Series.  Though the kid himself had his ups and downs over the next few years, he was a two-time All-Star and a World Series MVP in 2012.

By now, you know I’m not talking about Miguel Gomez (though he does match part of the description) or the 2017 Giants.  It was the 2008 Giants–and they were baaaaad. (Check out this Opening Day lineup. Remember Brian Bocock at SS and Jose Castillo at 3B? Good times.) And Pablo Sandoval, who started that year in A-ball, made his major league debut on August 14 after jumping right from AA, three days after his 22nd birthday.

Last night was about nostalgia, the 20-year reunion of the 1997 Giants, who won the NL West.  It was fun to see (well, hear, I was in Sonoma all day and listened to the first half of the game on the car radio coming home), but to me it was a bit of a head-scratcher.  The 1997 team wasn’t exactly a bunch of world-beaters, and they got knocked out of the playoffs in three games by the eventual World Series champion Florida Marlins (and what player connects that Marlins team and the ultimate destiny of the 2010 Giants?  And the Giants got even with Jim Leyland, in 2012, too. Sweep right back at ya, big guy.)  So why were the Giants making such a big deal about the three-and-out 1997 Giants?  Then I realized: It’s the messaging. The 1997 Giants were a worst-to-first team. That’s what the team wanted to remind the fans with last night’s hoopla:  We’ve been down before. We’ll be back.

So back to Pablo and his 2.0 debut. It didn’t start off well. There were boos mixed in with the cheers in his first two ABs when he went 0 for 2. There were more when he made an error on a wild throw that led to an unearned run.  But then the magic happened.  Sandoval’s leadoff double sparked a seventh-inning rally on the way to a comeback win in the tenth, and we got a “The Panda is on the move” from Kuiper, and Krukow was right–his double to the gap in left-center felt like I’d seen it a hundred times before, in happier days.

Look, I get the mixed feelings and the doubts expressed here about him. I feel them myself. But he did give them a spark last night, and I immediately thought of 2008.  It’s a rough year for Giants fans. We can use all the nostalgia and happy moments we can find.

I also get the “he’s a AAAA player” comments.  I’ve never been a big believer in him, either. But he had a great game on both sides of the ball, and for the second time in three nights, it was Parker being interviewed by Amy G after a win.  I don’t know what it all means for the future, and, like most of you, I’d suspect, I wouldn’t be happy to hear that he’s Plan A again going into next year. But Jazzy Jarrett waited his turn, did his time in the minors, took one (very painfully) for the team and Matt Moore in April, and he deserves this playing time. We should all be happy for whatever moments of success he experiences.  (And that sliding catch down the left field line made me want to cry with happiness. Watching our outfielders this year has caused me existential pain.)

I don’t see Chris Stratton as any kind of answer for a future Giants rotation. But all things considered, he did OK last night. There was good defense behind him (Parker) and bad (Sandoval), but bottom line, that’s a brutal lineup for a starting pitcher to go through–are you kidding me, with J.D. Martinez to go with Goldschmidt, Lamb, Pollock, etc.? Look out, whoever gets them in the playoffs–and two earned runs in five innings is not a bad outcome for a fill-in starter.  Good to see Kyle Crick get two innings of work, too. I think a big part of cutting bait with Kontos was to take a look at younger relievers, and that’s a good thing.

It’s no secret that I was never a Kontos believer, and I felt relief in hearing that his Giants tenure had ended. But then I read this tweet and I felt bad.  These are still human beings, and Kontos spent six years of his life and 99% of his MLB career with the Giants. You don’t expect to get suddenly dumped on August 5, after the trade deadline, and it must not feel great to think you got abruptly shipped off for literally nothing (“You want him–you got him”).  Of course, it’s better to know you’re going to a team that claimed you rather than just being DFA’d (though I doubt the Giants would have done that to him). Ironically, Kontos will now be teammates with the guy he was traded for in 2012 (Chris Stewart).  Good luck, George. You have memories and two rings, and the fans will cheer you when you come back to AT & T.

So…a good win that showed some heart, and if not necessarily “hope for the future,” at least some good memories were had.  Not bad, all in all.  Lefty out.